I’ve seen multiple reviewers quip that watching Contagion, Steven Soderbergh’s meditation on a global pandemic, in a movie theater is a bit like watching Jaws in a rowboat. That’s true. Even before Gwyneth Paltrow’s face gets peeled off during an autopsy, the way Soderbergh’s camera lingers on every bit of human contact makes you hyperaware of any cough, sniffle, or wheeze emanating from your fellow moviegoers. In that sense, Contagion is frightening as hell. Shame it’s not a very good movie.

The problem isn’t with what is on the screen. Soderbergh’s a great director with well developed visual chops, which he puts to great use in the beginning of the film as we trace the spread of the disease out of Hong Kong via a handful of people unfortunate enough to have interacted with the aforementioned Paltrow at a casino. We get quickly introduced to a broad range of characters, from public health officials and scientists tracking the disease, to those impacted by the spread, to even a crazed altmed blogger who sees the thing through the lens of conspiracy theories.

A good start. Problem is the movie plows on through the spread of the disease and the eventual development of a vaccine to stop it in a way that is almost completely devoid of the characteristics of engaging drama. The characters are barely fleshed out. Some disappear for long stretches of time for no good reason. The world’s going to hell in the background, we’re told, but it hardly ever shows (electricity flows, the water works, and everybody looks pretty well fed). There’s no real conflict, at least one that’s more concrete than the metaphysical “man v. nature” theme. Yes, obstacles are overcome and (in the end) someone saves the day, but it’s done with all the power of a midlevel documentary produced for high school students.

A part of the problem might be something for which Soderbergh and his collaborators should otherwise be praised. Everything I’ve read suggests that the science in Contagion is spot on. It’s rare enough for Hollywood to get it kind of right, but to get it really right is an achievement in and of itself. Unfortunately, it doesn’t necessarily lead you anywhere, dramatically. Years ago I blogged about a German film, Sophie Sholl - The Final Days, that was so true to the historical record that some scenes had entire stretches of dialogue taken directly from transcripts of the heroine’s interrogation session. Historically interesting? Certainly. Compelling drama? Not so much. Same with Contagion. The process of how things worked out is interesting in its own right, but it’s not particularly enthralling.

To the extent that Contagion goes looking for conflict, it finds it in the contrast between the diligent and persevering scientists/public health types and the nutty blogger mentioned above, played by Jude Law. There’s actually a lot there you could go into – click the link for Respectful Insolence at the right for a blog devoted to that kind of conflict – but Contagion stacks the deck too heavily on the side of the scientists for it to be a fair fight. Not only are the scientists all diligent, competent, and generally good at their jobs, they are also selfless altruists who make grand gestures for the benefit of their fellow human.

Perhaps the best example is Kate Winslet’s character, sent by the CDC to Minneapolis (where poor Gwyneth returns to lose her face) to get a handle on the situation and work with the local public health apparatus. Of course, she gets the disease and dies. With her dying action, she tries to give her coat to the guy in the cot next to hers in the ward where the dying have been stockpiled. On its own, it would be a touching human moment. Combined with a CDC director who gives his dose of the vaccine to the child of one of the facility’s janitors, a researcher who tests the successful vaccine first on herself, and a World Health Organization researcher who develops a quick case of Stockholm Syndrome (off screen, natch’), it’s just one more repetitive beat on the nature of the good guys.

In the face of that, Law’s nutty blogger never really stands a chance. It’s not enough that he floats the idea that the virus is the result of a biological weapons program gone amok (it’s not). It’s not enough that he revels in the standard anti-vax conspiracy theory that drug companies ramp up fear to get people to buy their products. It’s not enough that he promotes a bullshit herbal treatment for the disease that may lure in the gullible (although, to be fair, there’s no other treatment at the time). No, on top of all that, it turns out that he’s actually making a huge payday off the sales of said herbal remedy and, in fact, is arrested for (of all things) insider trading.

I’m not saying that Soderbergh gets it wrong in this conflict when he assigns the white hats and black hats. It’s just that the good guys are so good they border on saintly. Meanwhile, the antagonist is not only a loudmouth of questionable influence, but is a shitty money grubber, too. It’s hard to make compelling drama out of a conflict when you put your thumb on the scales like that.  Hell, even movies with Nazis as bad guys try to make them a little more complex than the mustache-twiddling baddies from 1930s serials.

Which is a real shame, because Contagion lays out how something like this would really go. With some tweaking, it could be educational and gripping. As it is, it just comes off as stilted and cold. One thing’s for certain – you’ll never look at a hand shake the same way again. Or Gwyneth Paltrow’s skull. 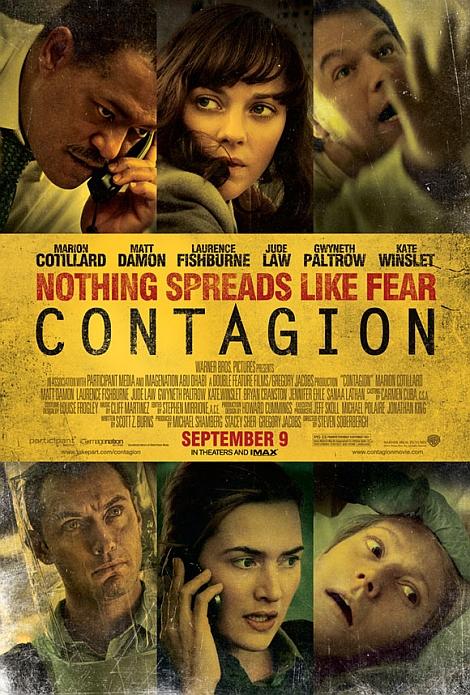