Friday Review: Under the Dome

The situation in which regular people find themselves basically stripped of civilization and the comforts of our modern world is a classic fictional trope, from the English school kids of Lord of the Flies to the few survivors of some planetary disaster in The Road or A Canticle for Liebowitz. Generally, those stories take people who may or may not have any prior relationship to one another and throw them into a world of anarchy and chaos.

Stephen King’s Under the Dome turns that trope on its side in two crucial ways. First, the characters in the book are all from the small Maine town of Chester’s Mill, population 2000 (in the off season, as it is in the book) and thus not only know each other but have a complicated web of alliances, bitterness, and business interests (legit and otherwise) connecting them. Second, although the titular dome throws life in Chester’s Mill into utter higgledy-piggledy, there’s no anarchy or absence of leadership. In fact, what’s so terrifying about what happens in Chester’s Mill is that the political machine that’s run the town for years functions perfectly once crisis hits, which leads to apocalyptic disaster.

Overseeing this mess is “Big” Jim Rennie – used car salesman, obnoxiously loud Christian, and gargantuan meth dealer. If Under the Dome is supposed to be King’s meditation on the United States after 9/11, Rennie is the stand in for Dick Cheney as the power behind the throne. Although Rennie is the second of three selectman (one is actually a selectwoman) who govern the town, he wields all the actual power. The analogy doesn’t quite fit – nobody ever voted for Cheney directly, while Rennie had won numerous elections to maintain his seat. If anything, Rennie seems to be King’s warning that, while we focus most of our attention on national politics, the office holders with the most power to really fuck things up are locals and we ignore the low-level political offices at our own peril.

Having said that, to the extent that King is trying to do something more than tell a compelling, terrifying story, he misses some opportunities to explore some interesting grey areas. For example, once the dome comes down, new cops are quickly recruited to brace against chaos and lawlessness. It would have been interesting to see one or two good people in these positions, honestly dealing with the competing concerns of security and liberty. Alas, since Rennie is the one doing the choosing, the new cops are all his henchmen (including his murderous son) and proceed to do precisely what you’d expect henchmen to do given that kind of power.

Another missed opportunity is the lack of any exploration of the Chester’s Mill body politic. The novel’s cast of characters is impressively large and King does a good job of working them all together, even if the individual characterizations are pretty shallow. However, they divide neatly into the obviously evil – Rennie and his flunkies – and obviously good – the couple dozen citizens who oppose him. King isn’t really interested in the rest of the unwashed masses, which is a shame because they’re largely the ones who voted for Rennie again and again. Why had they? Why were they so willing to believe any bullshit story he told them? After all, Rennie’s claim to power is that “the town” is behind him, but “the town” remains nebulous and unexplored.

As for the dome itself, it’s a wonderful literary invention. Although the word “dome” and some of the initial interaction with it would bring to mind the giant glass bowl dumped on Springfield in The Simpsons Movie (with which Under the Dome shares a passing similarity), it’s not a solid barrier. Instead, it’s a somewhat permeable force field of some kind, through which plot devices like speech, heat, and (in a very limited way) air can move but people, vehicles, and explosives can’t. It effectively seals the town off, but allows for some contact with the outside world.

To his credit, King doesn’t just plop the dome down and let it go all McGuffin on him. He provides an explanation for it, one that drives the final hunk of the book. Unfortunately, that explanation is neither all that interesting logically or dramatically. It leads the end of the book to be a real let down.

We tend to think the best of ourselves, that when faced with crisis we’ll rise to the occasion and do the right thing. Truth is, some folks will do that, while others will use the anarchy to enrich themselves (in different ways) and still others will simply be passive observers, numb from the shock of their world going to shit. King grasps that. So long as Under the Dome focuses on life under the dome, it’s a pretty compelling read. Bigger explanations, not so much. 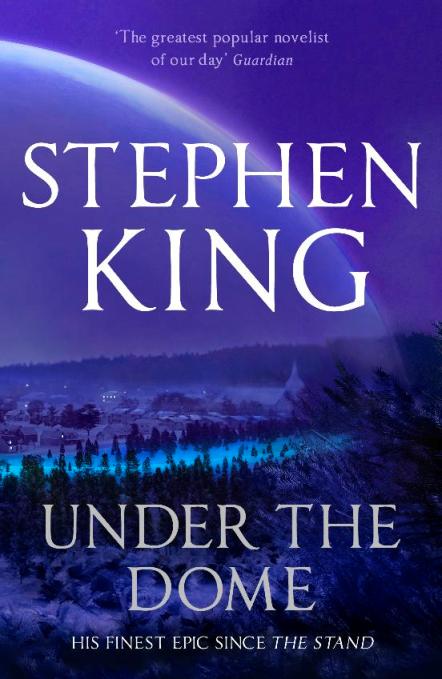