We Won! But We Still Suck!

Sorry, this post isn’t about my alma mater’s football team, who managed a complete turnaround to dump Oklahoma State last weekend. Although, hey, woo-hoo for that, right?

No, this is about the stunning cap to the horrible year another of my sports crushes has had, that being DC United. Take a look at the current standings in MLS’s Eastern Conference and you’ll see why: 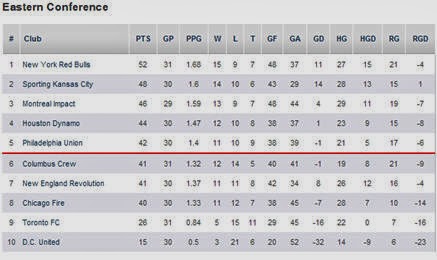 Not only are they at the bottom of the standings, they’d have to stretch quite a bit to even be the next-to-worst team in the table. For comparison’s sake, the walking disaster that is Chivas USA, the floor in the West, is on 26 points. What’s even worse is that DC had a great surge at the end of last season, returning to the playoffs and making it to the Eastern Conference final (vanquishing NYRB along the way – joy!). Things should have been better this year, or at least not this much worse.

Which is what makes last night all the more confounding and impressive.

This season marks the 100th year of the US Open Cup. This is the American equivalent to the English FA Cup and similar competitions across the world – knock-out competitions (as opposed to league play), generally open to a wide swath of teams from various levels within the country. Essentially, it’s a national championship. It’s fabled, particularly in England, for matches when the lower-division underdogs upset the top-division fat cats.

Well, last night, DC knocked off Real Salt Lake – first place in the West, 1 point behind NYRB for tops in MLS – in Salt Lake to win this year’s Open Cup, 1-0. The lowest of underdogs knocked down Goliath. Thank you, Lewis Neal, for the goal!

As a DC fan I am, of course, quite pleased. It doesn’t erase the turd of a season the team’s had in MLS, but hardware is hardware and hopefully it will be a springboard leading to turning things around next year. But it does make me wonder if such an upset is part of what keeps the broader American sporting public from caring about the Open Cup. After all, the final was consigned to broadcast on GolTV, which isn’t even available on DirecTV or Dish Network anymore. That’s disappointing in an era when soccer is widening its reach on “real” TV – why, even this past Sunday, NBC took a moment during their primetime NFL pregame show to run through the Premier League scores from the weekend.

Honestly, I think the whole process confuses casual fans. In American sports there is one competition, one goal. Every NFL team has one preferred endpoint for the season – winning the Super Bowl. There is no ancillary glory to be won along the way. An English Premier League team, on the other hand, begins the season looking at several ways to win glory – the league itself, the FA Cup, the League Cup, not to mention European competitions. At the end of the NFL season, there is one champ to rule them all. By next spring in England there will be several.

So I’m not sure that the Open Cup fits well into the consciousness of the typical American sports fan. Which is a shame, because it’s a competition with a rich history that rivals the World Series or Stanley Cup and is more ancient than anything professional football or basketball has to offer. It deserves more attention.

Email ThisBlogThis!Share to TwitterShare to FacebookShare to Pinterest
Labels: soccer