Friday Review: The Weight of the World

In spite of what Foreigner says, it never really feels like the first time.  There's just something about the spark of discovery that can't be replicated.  That's true of music as much as it is of, well, other things.

When Sanguine Hum took the stage at ROSFest 2012 I hadn't heard note one from them.  They only had one album out and I was perfectly willing to wait and see what they were all about in a live setting.  That worked out well, as they completely blew me away.  I went out and got a hold everything related to the band I could, from their album Diving Bell to a pair of EPs by a prior incarnation of the band called Antique Seeking Nuns.  I even tracked down an electronic side project called Nunbient. I was musically smitten.

Then, this year, along came The Weight of the World.  A new album!  Oh, joy!  Oh, rapture!  Oh . . . hey, wait a minute.  This isn't quite the same, is it?  No, this time I've got some idea what to expect going in.  The result, as it happened, was that the new album landed in my mind with a kind of depressing thunk.  It wasn't bad, certainly, but wasn't brain rattlingly brilliant.

That was months ago.

Now, I'm pretty convinced that The Weight of the World is, in fact, brain rattlingly brilliant.  It takes the style of Diving Bell, refines it even further and adds some neat extras (some imported from Nunbient, to my pleasant surprise).

Take "From the Ground Up," which opens the album with just a synthy beat and vocals, unlike anything from Diving Bell.  Things get more "organic" once the whole band joins in (Matt Barber favors a lot of Rhodes piano, which is far from a bad thing) and the long, lilting vocal lines sit atop winding guitar and synth lines.  Similar touches of electronica infuse "Cognoscenti" and the exponential spiraling of "Day of Release," as well.  A couple other tracks, including the instrumental "In Code," conjure a Zappa-esque feel with some finely crafted tuned percussion work.  All this leads to the epic title track, which wraps up everything in neat, if sprawling, package.

In the end, it's hard to pin down just what it is about Sanguine Hum that hits my musical sweet spot.  Their music is dense, layered, and complex but doesn't come off as "complicated" just for the sake of it.  In other words, the band doesn't scream "progressive rock," it's just as proggy as it wants to be.  On the other hand, it's generally melodic and tuneful, but with a dark edge to it that doesn't exactly leave you walking down the street whistling. Antinque Seeking Nuns had a Canterbury-ish sense of humor that's lacking, or at least tempered by serious melancholy, in Sanguine Hum.  Maybe that's it - that combination, leavened with a heavy dose of genuine Englishness, curdles into something I just can't resist.  It doesn't sound like anything else out there, that's for certain.

Regardless, The Weight of the World lives up to its ambitions and is, if not the very best album of the year, certainly one of them. So, no, it's not like the first time.  It's even better. 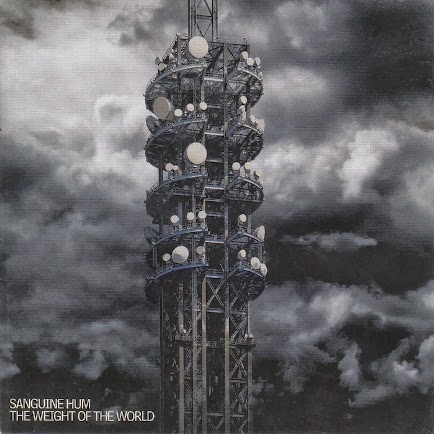