A few weeks ago on Facebook my friend Robert Pashman (or 3rDegree fame - go buy their music!), put up a list of 10 progressive rock albums that had been particularly influential on him.  I liked the idea of such a list, one that's not "favorites" or "bests," but that had some kind of personal meaning.  Given that I'll always shamefully steal somebody's idea if it's a good one, here's my version of that list, slightly modified.  These are the ten prog albums that have been personally influential to me because of some particular door they opened or some such thing.  Since, as I said, this isn't a list of bests and, frequently, these aren't my favorites albums by these bands, I've added a note about those too, if they're different.

In chronological order of their release, not when I first heard them . . . 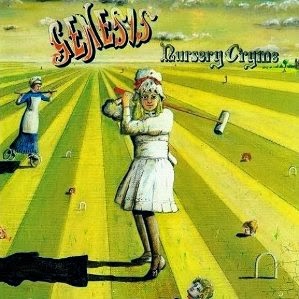 Having two older brothers meant I was exposed to a lot of music that was "too old" for me when I was a kid.  Without a doubt, the one that took the most was old Genesis, of which my brother Todd had all the Gabriel/Hackett era albums on LP.  I got into them all at various points, but I think this one was the first one that really hooked me.  Just look at that cover - how could that not lure in an impressionable elementary school kid?  Musically, it was the two story songs on side one - "The Musical Box" and "The Return of the Giant Hogweed" - that roped me in.  I didn't get it all, but I loved it.  Genesis, as a result, is probably my favorite band of all time - at least today.
Favorite album: Selling England by the Pound 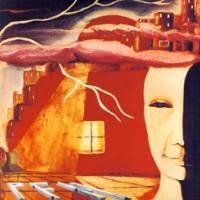 Until I got to college I didn't know that prog spilled much beyond the borders of the UK (and Canada and the US, to a certain extent).  I certainly had no idea that there was a thriving prog scene in Italy in the 1970s and that was where some of the British bands (like Genesis) first gained some popularity.  Storia di un Minuto was my first foray into Itlian prog and any music at all that didn't come with English lyrics.  That was an important Rubicon (so to speak) to cross because, while I'd heard and enjoyed a lot of instrumental music, I didn't know if I could get into something with lyrics that I completely couldn't understand.  Turns out, not only can I get into something like that, I'd much rather (in most instances) hear lyrics in a foreign tongue as opposed to stilted, forced English.  It no doubt helped that PFM's style of symphonic prog is beautiful and spiced with just the right amount of jazzy embellishments. 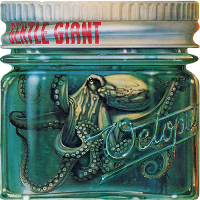 When I went to college and got on the Internet, I discovered two things about prog: (1) it was still a living, if much lesser, genre (to quote Zappa on jazz, "it's not dead, it just smells funny") and (2) there were a whole bunch of bands from the 1970s in the genre they I had never heard of before.  I think of these as "second tier" bands, not based on quality but because they never really broke out the way Yes, Pink Floyd, and the like did. Nevertheless, they were on major labels, toured regularly (sometimes even in the US), and generally had a good run.  One of the first of these bands I discovered and loved was Gentle Giant and, particularly, Octopus.  I'd never heard such a diverse collection of tunes before on one album that, nonetheless, sounded like they all belonged together.  Octopus taught me that there were hidden gems out there and that looking for them could be a lot of fun (and expensive!). 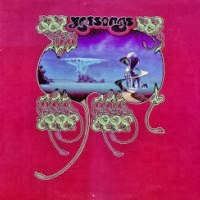 Being a child of the 1980s and 90s, by the time I was actually buying albums I did it on cassettes (briefly) or CD.  I still managed to get a few LPs, including this triple-LP live monument, complete with the big Roger Dean gatefold sleeve.  I got it on vacation one year when we visited my aunt who lived outside Philly.  I don't know what made it an appropriate souvenir, but hey, you buy stuff on vacation, so what the fuck?  Given what's included - all of Close to the Edge and most of the important bits from Fragile and The Yes Album - an argument could be made that it's the only Yes album anybody needs.  It's a losing argument, of course, but it could be made with a straight face.  You also get solo spots from most of the band, which for Rick Wakeman leads to belting out the Hallelujah Chorus on a Mellotron.  When I was a kid I had no idea how he did it - I knew about samplers, but in 1972? - but thought it was awesome and is part of why I fell in love with that instrument.
Favorite Album: Close to the Edge 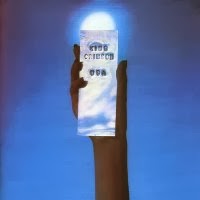 Occassionally I have found myself at odds with the prevailing prog zeitgeist.  One of those situations involved the last of King Crimson's many 1970s variants, the one based around the rhythm section of John Wetton and Bill Bruford.  I leaned more toward the Belew era stuff and didn't quite get all the fuss over Larks Tongues in Aspic or Starless and Bible Black.  That changed with USA, which is drawn from that version of the band's last tour (after which Krim, for neither the first nor last time, broke up).  It's a powerful, blistering set, during which Wetton and Bruford show who were really the bosses in that lineup.  The improv "Asubury Park" is funky and menacing all at the same time.  USA (which, in spite of being a live album, has some aftermarket studio adjustments) may not be the definitive live document for that Krim era, but it's the one that got to me.
Favorite Album: Red 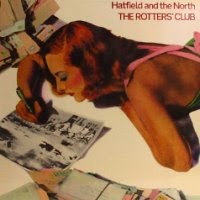 One of the things I discovered when I found out about those second tier bands was that a whole subgenre of prog arose from one specific spot in England, the Canterbury area.  Though it's hard to pin down just what makes the "Canterbury sound," it's enough to say that most of the bands that came out of that area had a lighter touch than their symphonic cousins, dabbled in the jazzier side of things musically (I often think of Cantu bury prog as "rock guys playing jazz," while fusion is "jazz guys playing rock." Your mileage may vary.), and often had lyrical content of the surreal and absurdest type.  Hatfield and the North definitely had all that in spades and this album opened my ears to this kind of music.  It also introduced me to keyboard player Dave Stewart, an immense talent and wonderful writer (of music and prose). 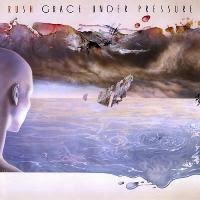 I was a big Rush fan long before I started buying music for myself - one of those other few LPs I had was 2112 - and for a long time I thought they would be what prog was in the world going forward.  To that extent, Grace Under Pressure is the first Rush album I bought when it was new (on cassette!) and, so far as I can remember, the first new album I really looked forward to.  At a time when the 70s prog giants were in the process of "selling out," Rush still seemed to be in their own world, even if it was one that had been streamlined and polished since, say, Hemispheres.  Still one of my favorites.
Favorite Album:Moving Pictures 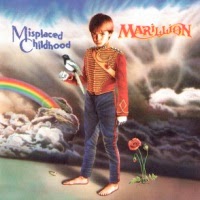 As I said above, one of the things I discovered in college was that prog was not, in fact dead.  It had never really gone away, although it's commercial heyday was over just after I was born.  Nonetheless, I learned about a brief prog renaissance in the early 1980s and, in particular, of Marillion.  I'd actually heard of Marillion before - my brother had Misplaced Childhood on LP - but never actually heard them.  Misplaced, a highly polished concept album about - well, I'm still not quite sure (ask Fish) - was their commercial high water mark, producing a couple of European chart hits.  It is, perhaps, the definitive example of the early 80s phase called neo-prog.  More importantly to me, it was an entrance into the world of "new" prog that showed it had a lot to offer, as well as an introduction to a band that would quickly become a favorite of mine.
Favorite album: Marbles 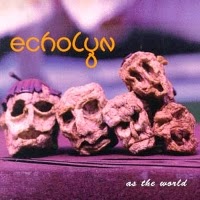 Prog didn't die in the 1970s, and even after the quick (commercial) rise and fall of neo-prog, the genre slouched along until the 1990s, when the Internet and easier CD production led to the explosion that continues today.  echolyn was a bit part of it, breaking through to have as the world released on a major label.  Hell, I found it just by browsing my local CD shop in Morgantown - no Internet orders, no Amazon searching, nothing!  Aside from that, this is one of those albums that I can remember listening to the first time, being completely blown away by the tight three-part harmonies and exquisite playing.  echolyn would become one of my favorites and a prime example that modern prog was alive and well.
Favorite Album: Mei 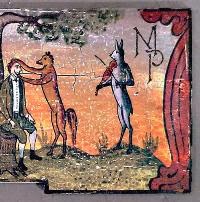 One of the cornerstones of the modern prog scene are festivals.  Held every year (hopefully), they bring anywhere from a few to a dozen bands together in one place over one weekend.  Not only are they a great place (sometimes the only place) to see favorite bands, they're also great for being blown away by some group you've never even heard before.  My first festival experience was the dearly departed 3RP festival outside Pittsburgh.  It's only fitting, then, that my first completely out of left field unknown find at a festival happened there and involved Pittsburgh's own Mandrake Project.  There's something special about having your mind blown by a band you knew nothing about before they took the stage.  I'm happy to say it's happened a couple other times since and, I suspect, will again in the future.

Finally, an honorable mention.  I left The Who's Tommy (1969) off this list because it's not really "prog," but it nonetheless had a big impact on my prog life.  It was the first album I was aware of that aimed to be something more than a collection of songs.  In other words, it was my first concept album.  That's not something that's only part of prog, but, as a genre, prog's embraced it pretty heavily.  The deaf, dumb, & blind boy helped launch me on this amazing journey.
Posted by JD Byrne at 12:14 PM

Email ThisBlogThis!Share to TwitterShare to FacebookShare to Pinterest
Labels: music