Friday Review: A Dance With Dragons

George R.R. Martin’s epic fantasy series A Song of Ice and Fire got off to a fast start, relatively speaking. The first three books appeared in only four years, which, given their doorstop size, is pretty impressive. No surprise, then, that legions of fans were hooked in those years. Things slowed down, considerably, with book four, A Feast For Crows, taking five years to hit the shelves.

Feast was disappointing, partly because three major characters from the earlier books were entirely absent. But no fear - Martin explained in an author's note that Feast as originally conceived was too sprawling for one volume. Rather than split it chronologically, he split it up by location. Those three characters would return in the next book, which was well on the way to being finished, anyway.

That was six years ago. Was it worth the wait? Does Dance measure up to the hype? Yes and no.

The good news is that we do get lots of those three missing characters. Tyrion Lannister, the hard drinking, smart ass dwarf, has his adventures, while the dragon queen Danerys and Night Watch commander Jon Snow deal with the problems of rule in their distinct lands.

The bad news is that, all things considered, the overall plot of the series hasn't advanced all that much by the end of the book. It would be wrong to say that nothing happens - lots of stuff happens. But our main characters spend the book dealing with specific problems, only to have the rug pulled out from under them in the end and essentially reset everything. What happens along the way is interesting enough, but it seems like filler when it has very little payoff in the end.

Thankfully, Martin throws in a couple of new faces along the way who (unlike the ones in Feast) actually make some impact on the plot. One, in particular, shows up with yet another claim on the throne of Westeros and takes some action to get it back.

In the end, it's hard for me to really get a handle on Dance. For one thing, I just came to the series recently, so I haven't been waiting six years for this installment to appear. I don't have the issues with Martin that some fans do. But, I'm deep enough into the series that it's like a favorite TV show - I'm happy to get back into the world and meet up with interesting characters, even if the end result isn't completely satisfactory.

The bottom line? The next book can't get here fast enough. 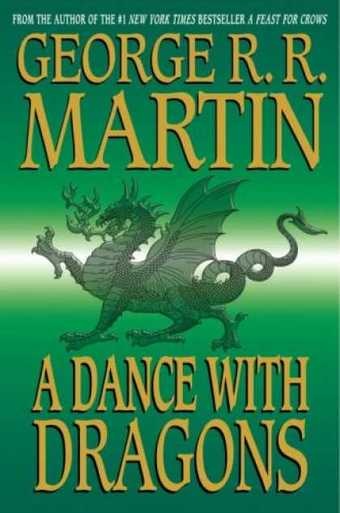