I’ve read lots of books and seen lots of movies and TV shows with characters that are less than stellar. Heroes, even, who are deeply flawed and, in many cases, assholes. I get it. A complex and tortured protagonist makes for compelling drama. But in all of my life, I’ve never wanted to haul off and hit a fictional character.

Until I met Quentin Coldwater. If I ever, somehow, ran into Quentin, I would no doubt pop him in the mouth on general principles. Quentin is the hero and main character of The Magicians, which more than one reviewer dubbed “Harry Potter for adults.” Quentin is also a complete, utter, and colossal douchebag.

Quentin is an about-to graduate high school student who is whisked away to an exclusive (and invisible) college in upstate New York, where he will study instead of Princeton. During his years there he, along with his friends and rivals, learn to be magicians. To what end? Well, there isn’t really one. There’s no great battle against evil for which they are being trained. Further study of the actual mechanics of magic is discouraged, as it tends to make people go crazy (allowing the author to skirt the issue of how magic in this world actually works – either a clever sidestep or a cowardly dodge, I’m not sure which). Although we’re told that magicians work around the world behind the scenes of governments and other power centers, the world of The Magicians is, in terms of history and society, exactly like ours.

Which is why, for the last hunk of the book, after Quentin and crew have graduated, they spend most of their time in another world, where their training comes in handy. Called Fillory, it’s a lot like C.S. Lewis’s Narnia with the serial numbers filed off. In fact, according to a comment to this review, it was originally supposed to be Narnia but Lewis’s lawyers put the kibosh on that. Exciting things happen in Fillory, and lessons are learned, but none of it really carries much weight.

That’s because Quentin is such a colossal douchebag. He begins the book as the stereotypical moody teenager, completely disaffected with the world around him. And by the end of the book . . . he’s exactly the same, only older (horribly lame attempt at a happy ending/sequel setup notwithstanding). I get the point being made (Quentin is constantly looking for meaning anywhere but where he is and is never able to find it), but it doesn’t make for a protagonist that I can really care about.

Take, for instance, the time Quentin spends in New York City after graduating from college. He reunites with some friends who graduated a year earlier. Unlike his dour home in Brooklyn, they live in Manhattan. They don’t have to work, have mastery over the elements, and spend their days planning lavish dinner parties. They drink too much and fuck (too much, too, as it turns out). All the while, he’s got a girlfriend whose only real problem is that, for all her brilliance, she can’t see what a douchebag Quentin is. With all this going for him, Quentin is still a miserable shit. Seriously? He’s not even the 1%, he’s the 0.01% and he’s still a mopey twit? Arghh!

Given all that, I can’t say I really liked The Magicians, obviously. However, it’s got an episodic feel to it and some of the individual set pieces are worth the trip. Others aren’t, such as the laughably bad ending. It’s definitely a mixed bag.

There’s a sequel, as I mentioned, which I already have to I figure I’ll get around to reading it at some point. I only hope that, a few years on, Quentin’s learned to enjoy himself a little bit. Or I’ll have to pop the douchebag in the mouth. 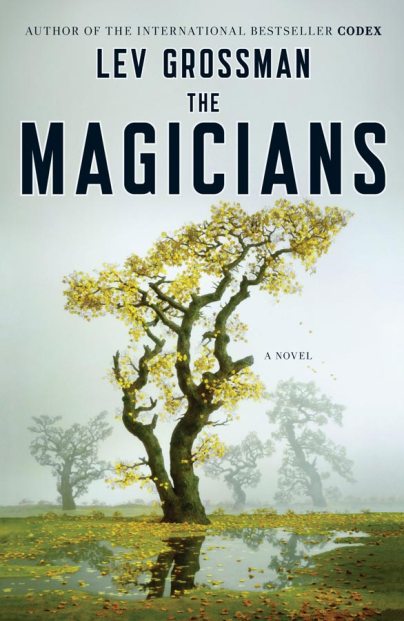