Since I went to my first prog fest outside Pittsburgh a few years ago, I’ve gone back and forth about whether to try and get up to speed on bands playing at a festival before I actually go. I’ve both gone in completely cold and completely prepared and both approaches have their plusses and minuses. What I’ve settled into is looking at how deep a particular band’s catalog is and, if they’ve got more than a couple of albums, pick one up ahead of time to try and get my feet wet (aurally speaking, of course).

So why, you might ask, did I pick up the new album from this year’s ROSFest lead off hitters DeeExpus (don’t ask what the name means – I have no clue), given that it’s only the band’s second? A good question with an easy two-word answer: Mark Kelly. As a long-time Marillion fan and keyboard player Kelly’s one of my musical heroes (and a nice bloke, to boot). I thought it would be interesting to hear him back in the overtly neo-proggy widdly-twiddly keyboard role.

That being said, the main man behind DeeExpus is Andy Ditchfield ,who made a brief appearance at ROSFest last year during Tinyfish’s excellent Friday night set. Ditchfield is the main writer for the band, in addition to handling guitar, vocals, and keyboards on most tracks. Kelly throws in on a few of tracks, most notably the 25-minute title track. Regardless of who’s playing what at any given time, the tracks hum with strong melodic bits that define neo-prog (for better or worse).

They also reflect a trend in recent years of neo band leaning more and more on hard-rock style riffing. “Me and My Downfall,” the lead off track here shows that particularly well. I don’t know if this is just a natural progression or a change that’s been brought about by the success of heavier prog bands like Dream Theater, Porcupine Tree, and Opeth (that’s my guess). Regardless, DeeExpus never slips over into too much balls ‘n chunk, which I appreciate.

As I mentioned, the centerpiece of the album is the epic “King of Number 33,” which is the best long-form prog tune I’ve heard since The Tangent’s “In Earnest” back in the last decade. In this case, the song tells the story (inspired by actual events, I believe) in which “Number 33” is a bus and the “King” is a mentally ill man who, after years of being a mostly harmless oddity, explodes into some kind of violence (just what is left quite vague). Maybe it’s because I have a particular affection for epics about lost souls (“In Earnest” certainly qualifies as well), but the lyrics really grab me in a way that lots of others don’t. Regardless, it’ll be brilliant to get it live in all of its glory in Gettysburg next week! 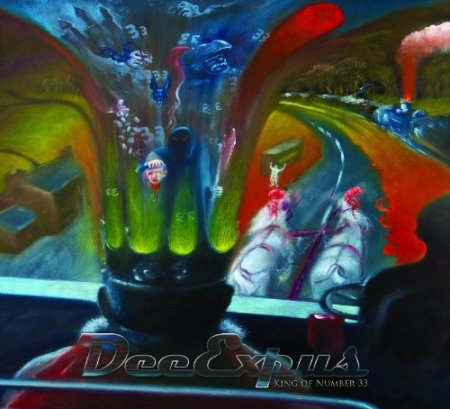