In his penultimate column for FilmCritic.com, John Scalzi laid out nine sci-fi flicks “you should see that you probably haven’t.” I was pleasantly surprised to have either seen all of them or have them in the Netflix queue, with one exception. I knew the name Destination Moon, but had no idea it was a George Pal production and was co-written by Robert Heinlein. With that kind of pedigree, I immediately hit Netlfix and put it at the front of the line. So, was it a journey worth taking?

I think so, although more for archaeological purposes than sheer entertainment. Made in 1950, Destination Moon has a hilariously overwrought “American industry, fuck yeah!” setup that makes you wonder if Ayn Rand, in addition to Heinlein, had a hand in the script. After a governmental rocket program is scuttled by sabotage (done, probably, given the times, by filthy commies!), private industry takes over. A rocket is built to take a crew to the moon (the mechanics of which are explained by Woody Woodpecker). Meddlesome bureaucrats try to stop the launch (due to concerns over its nuclear propulsion system), which proceeds just steps ahead of a court injunction. Really.

Once the rocket launches, things really get off the ground, so to speak. From there on out, Destination Moon is a solid piece of 1950s hard sci-fi, complete with mathematical calculations and legitimate concerns about the safety of the whole enterprise. Of course, some of what is on screen we know now is wrong – laughably so, in some cases – but given where we were at the time, it’s pretty solid.

Unfortunately, the focus on hard science makes for a somewhat dry dramatic arc. Our heroes reach the moon, but this isn’t the moon of Georges Méliès or H.G. Wells?. There are no natives who take our heroes hostage. Not even any man-bats or what have you. Only rocks, dust, and a spectacular view of the Earth. Supreme credit to Pal and his crew for not trying to create excitement at the expense of accuracy. Shame it makes things a little bloodless.

More to the point, it forces us to focus on the heroes themselves who are, to put it mildly, barely defined at all. The notable exception is the second-string radio operator, the walking stereotype of a Brooklyn dimwit, who becomes the audience surrogate when things need explained, in spite of the fact that we all saw the damned cartoon not too long before. He’s hammered in as comic relief that just doesn’t work.

Thus, when drama finally arrives on the Moon, in the form of a variant on “The Cold Equations,” it’s really hard to care that one of the four crew members might have to get left behind to die, especially if it’s the annoying guy from Brooklyn. In perhaps the only real sop to story ahead of realism, the crew has a “Eureka!” moment and figures out a way to leave the Moon safely. So nothing’s really lost, for all that.

If only they would actually get home. It’s ironic that Destination Moon ends with the rocket on its return journey to Earth, but before reentry. We know from Woody that the rocket will deploy a series of parachutes to slow its descent before landing. Unfortunately, nobody seems to have addressed the problem of reentry temperatures and, thus, it seems that our heroes are destined to escape from the Moon only to burn up upon return to the Earth (or die in a fiery crash). Again, it’s likely they didn’t know any better at the time, but still.

While Destination Moon lacks quite a bit as a film, one thing going for it are its exquisite visuals (it won an Oscar for visual effects). It’s clearly dated to 21st Century eyes, but they do a fantastic job of servicing the story and providing some unique views of places nobody had ever been before.

Destination Moon is a odd one. It’s got a cheesy 1950s B-movie sentimentality, but it’s visually impressive and scientifically rigorous (given the times). We rarely see that in modern sci-fi. So maybe it’s more impressive than I give it credit for. 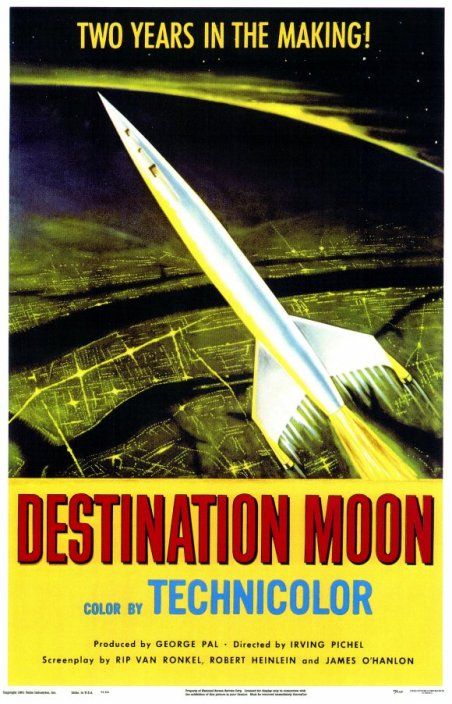