Friday Review: Slavery by Another Name

You’ve heard of the “banality of evil,” the theory that great evils aren’t perpetrated by supervillains or the criminally insane, but by ordinary folks who think they’re doing the right thing. I’d like to add a corollary to that – the “redundancy of evil” – in that when unjust attitudes and policies are enshrined in law, the evil wrought by them is so repetitive and so mind-numbingly predictable that it tends to become second nature. At the very least, it loses some of its sting in the retelling.

That’s the only real fault of Slavery by Another Name, an exhaustive survey of one of the country’s overlooked indignities. It focuses on a period where, although slavery had technically been abolished by the Thirteenth Amendment, it nonetheless continued to exist in de facto fashion in many southern states. Many states had convict labor programs, in which prisoners serving criminal sentences were leased out to private industries. More specifically, someone would be arrested for a minor crime, sentenced to pay a fine and court fees (which escalated the more one insisted on his innocence – shades of Brazil), and then, when he was unable to pay it all, sign a “contract” with a private concern who would pay the fine/fees in return for a period of labor.

As Blackmon demonstrates, this system was used to hoover countless black men into the system on, at best, minor charges that were unevenly enforced and, at worst, completely fabricated charges (many records, he reports, don’t even note the actual charge for which someone was later convicted and sentenced). Unable to pay the fines and fees, they essentially became chattel, bartered and traded from state officials (local sheriffs, mostly) and private concerns. They were sent to cotton plantation, mines, and other concerns that fueled the industrial development of the South after the Civil War.

To call conditions brutal would be an understatement. As Blackmon explains, in mind numbing detail, work conditions were little better than they were during antebellum slavery and, in some cases, even worse. A slave owner, after all, at least had a motivation to protect the investment he made in a particular slave. An industrialist leasing convicts, however, had no such motive. When one died (and they did, in scores), he’d simply order up some new ones.

As I said, sometimes Blackmon gets bogged down in the atrocities he uncovered, which is only natural. Maybe that’s why the middle section of the book, which details the federal government’s attempts to prosecute the perpetrators in the early years of the 20th Century was the most interesting portion of the book for me. Essentially, Teddy Roosevelt tried a bipartisan reach out that would make Obama proud – appealing to “reasonable” southern Democrats in order to create a bipartisan (and bigeographic) solution.

Of course, it didn’t work. For one thing, while the Thirteenth Amendment eliminated legal slavery, Congress had not at that point actually made engaging in slavery a crime. That left federal prosecutors (‘cause the local ones sure as shit weren’t doing anything) tied to a statute originally enacted to deal with peonage in former Mexican territories. In the end, although lots of guilty pleas were generated, the sentences were mostly small fines that went unpaid. One person (if I’m remembering correctly) actually went to prison. Some of those who otherwise pleaded guilty went right back to business afterwards.

The other problem, of course, is that these were not simple criminal prosecutions. They struck directly at the heart of the post-war South’s conception of itself and the role of freed blacks in it. Woven through the tales of torture and death in work camps are asides about lynchings, race riots, and virulent white supremacy (not all confined to the South, of course). Potential witnesses feared for their lives, as did some law enforcement officers. It’s no surprise that the system perservered during those years.

In fact, after that initial Roosevelt attempt to curtail the practice, things ran smoothly until the beginning of World War II, when the federal government stepped in again. Not based on any great principles of justice or racial equality, mind you, but because they recognized the propaganda value of the practice to the Nazis and Imperial Japanese (one prosecution in Texas is praised in the local paper solely for denying the Japanese a means to appeal to our own disaffected minorities). By that time, some other demographic shifts made it possible to squash the industrial slavery system once and for all.

Understandibly (given the title), Blackmon’s focus in the book is on how the slave labor system was used to keep nominally free blacks in a state of subservience. But two other things jumped out at me throughout the book that I think speak to other aspects of the system.

For one thing, the entire scheme was designed to use the law, or the patina of the law, to keep blacks in their place. The men who sent convicts into industrial hells were sheriffs, judges (usually of the low level magistrate types), and other officials. They weren’t working outside the law, they were using the law for their own ends. It was the gloss of legality that allowed them to perpetuate the scheme on a populace that was largely ignorant (and kept intentionally so) of how such things work. Not to go all Godwin, but there’s a frightening similarity to the horrors of the Third Reich, many of which were written into the statutes to make them “legal.”

For another, the entire system is an example of the sickening synergy of a public trust (the treatment of prisoners) and unregulated free enterprise. Presented with a vast supply of nearly free labor, with no recourse to and legal protections for abuse and mistreatment, industrialists did what they tend to do – push ethics and morality to one side and do what’s best for the bottom line. It’s a cautionary tale for a country where one major political party still thinks the solution to any problem is less regulation and getting out of the way of “job creators.” History shows what happens when that’s taken to an extreme.

Often when we look at history, especially the history of atrocities committed in our own past, we do so with a modern perspective of moral superiority. Such barbarity wouldn’t happen again, surely. We’re better people now, right? Evidence suggests otherwise. For-profit prisons are all the rage, to the point where one company offered to buy several states’ prisons (in return for a guarantee of occupancy, of course). Such privatization of public obligations have led to scandals like the one in Pennsylvania where two judges got kickbacks from a private prison company for sending them juveniles to lock up. Or situations like this, in which a private prison company simply packs up and moves out of state when a federal judge calls its juvenile facility a “cesspool of unconstitutional and inhuman acts and conditions”. And did I mention that debtor’s prisons are making a comeback?

Blackmon has made a great contribution to our understanding of our own history. It would be a shame if people see it only as that, tut tut about how evil the olde days were, and shuffle it down the memory hole.

The Details
-----------------
Slavery by Another Name: The Re-Enslavement of Black Americans from the Civil War to World War II
By Douglas A. Blackmon
Published 2009
Winner, 2009 Pulitzer Prize for General Non-Fiction 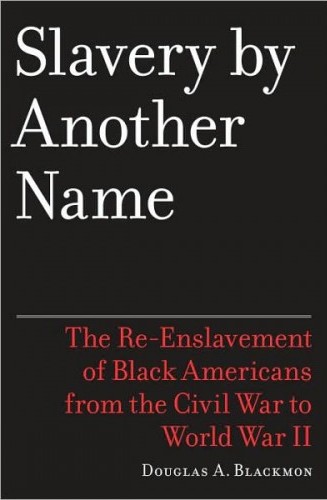