A couple of weeks back, K (the girlfriend) and I headed off to Philadelphia for a few days (sans critters this time). The motivation for Philly was Marillion returning to the United States on tour for the first time since 2004. It was the third time I’ve seen them, each time a little further from home. At this rate, I’ll wind up in Bangor, Maine, just to go to a concert.

I should mention that K is not a particular fan of prog in general or Marillion specifically. But she is a very patient, loving girlfriend and didn’t blink at the thought of going to the concert with me. The long weekend and short vacation didn’t hurt, of course. She also took a lot of the pictures.* Thanks, honey!

As is typical when we breeze into town for a few days, we stayed downtown (for the most part), on Penn Square. 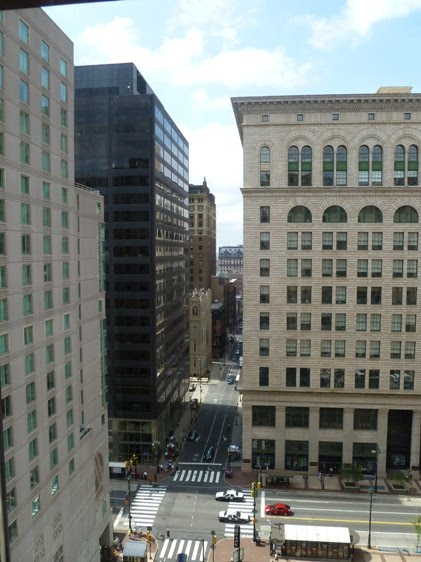 The night view right outside the hotel, looking up at the Ben Franklin statute on top of city hall, was really cool, but I couldn’t get a good picture.

First day we spent on foot, basically wandering around the neighborhood. The Reading Terminal Market, a huge collection of ethnic food places, was just down the block. It took more than an hour just to work through it, much less decide where to have lunch. We settled on a Cajun place serving gator sausage gumbo. Good stuff!

We also wandered through Chinatown, in which K bought strange, odd, spiky fruit. Yes, we are that kind of tourist. 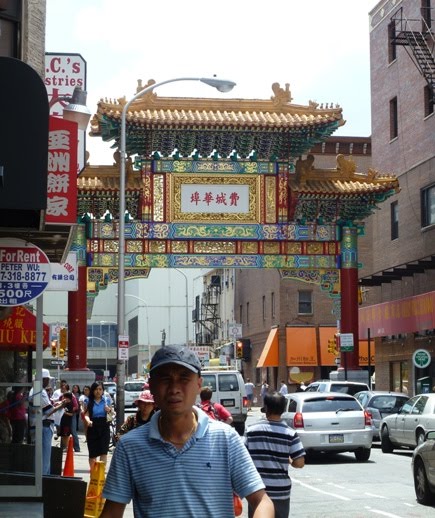 It lives up to the hype. I had the world’s best ramen soup and a kobe beef rice bowl, while K worked through an 8-course tasting menu. Aside from one of the “pallet cleanser” courses (some kind of strawberry and vinegar soda), it was all excellent. So I was told. The restaurant itself has a cool vibe, with subdued neon lights of shifting colors underneath every table. Very conducive to conversation.

We went to Philly a few years ago and managed to avoid one of its more famous attractions – the Philadelphia Museum of Art. It’s a fabulous old building with lots of neat stuff, most of which is arranged in period appropriate rooms. In fact, some of the Asian artifacts are housed in rooms transported from Japan and China. And, of course, that’s where Rocky is. 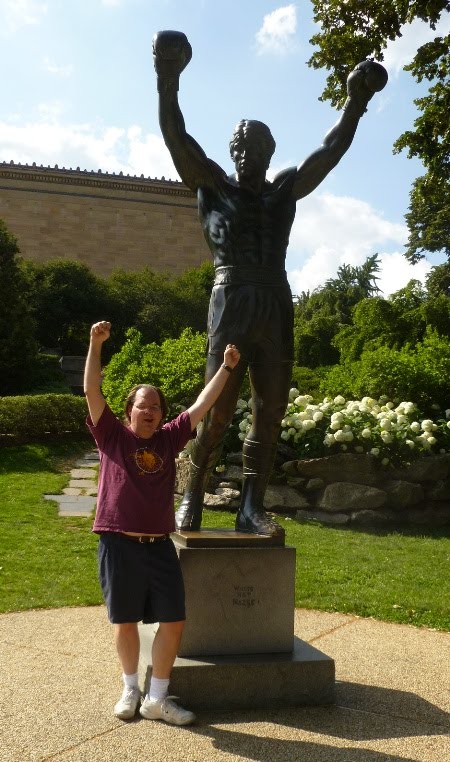 I wanted to try and check out the relocated Barnes Foundation collection, but it apparently takes an act of Congress to get in. It was outside of the Museum of Art, waiting on a cab, that I spied this abomination. 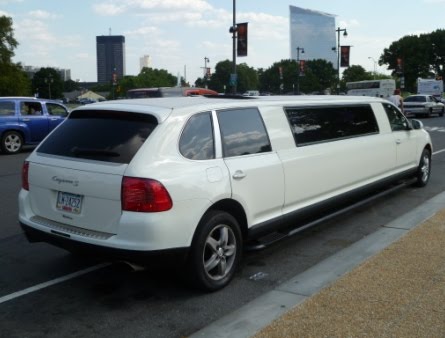 I hope all the money they’ve made on SUV’s keep Porsche warm at night, since they sold their soul to get there.

That night, it was concert time! The venue, the Theater of the Living Arts, is on South Street, just down the street from Jim’s, one of Philly’s premier cheesesteak venues. So we planned to hit Jims for a bite, then head to the show. 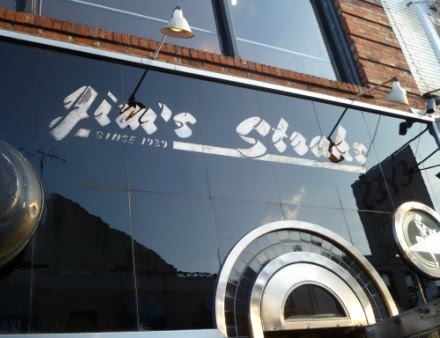 When we arrived, the line at Jim’s was out the door and around the corner. And so we stood. This would be a recurring theme for the evening. To be fair, Jim’s has a system and it works pretty quickly, all things considered. As for the sandwich? To be honest, I wasn’t overly impressed. It was good, don’t get me wrong, but not the revelation I expected.

The TLA is on the next block down from Jim’s, but there wasn’t anybody hanging around outside before the doors opened. Seemed odd, but then we found out why – they line formed down the block and around the corner (in front of another cheese steak place – they’re everywhere!). And so, with an hour before the doors opened, we were faced with this: 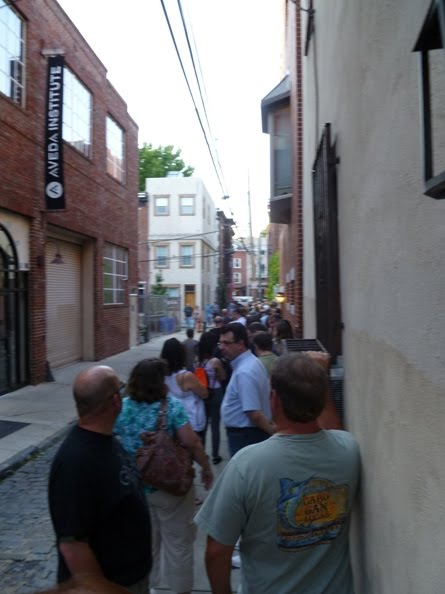 K was not particularly enthused about doing more line standing. 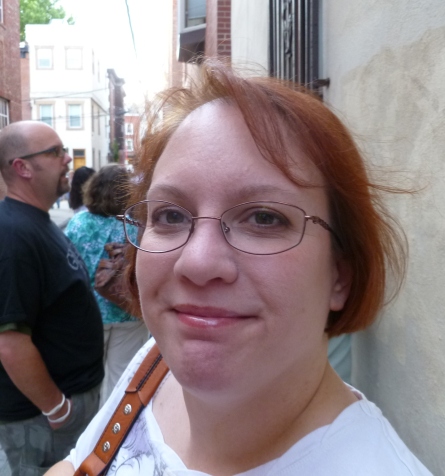 Neither was I, to be honest. The venue itself was mostly standing room only (the few seats in the balcony were reserved for VIPs), which meant we were going to spend the rest of the night on our feet. After about an hour, we were let out of the alley and into the venue. We quickly staked our ground at a post near the back of the main room, next to the sound guy’s station. 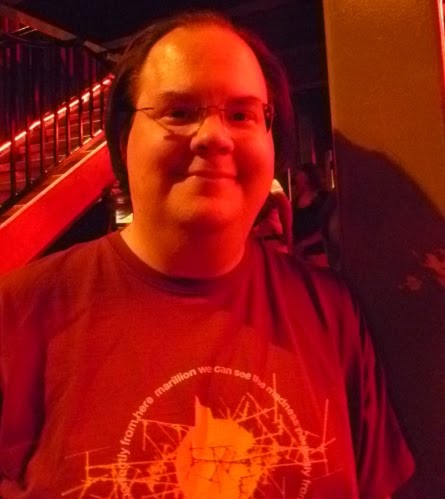 The TLA is an old movie theater, so the floor slopes down toward the stage, providing some vantage point from the back of the room. It was a good view, for me at least. K did her best to snap a few pictures (sans flash, due to TLA policy), though the conditions made it difficult. Some ended up interestingly abstract, tho'. 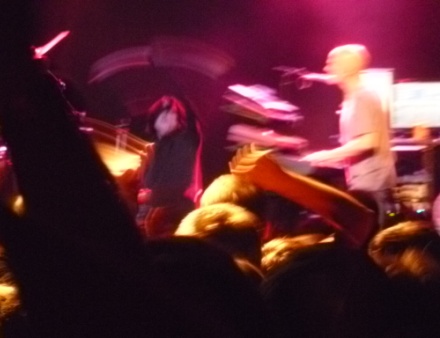 This one came out a bit better, H with his MIDI cricket bat. What? It's a cricket bat with MIDI technology for triggering samples and such. Doesn't everybody have one? 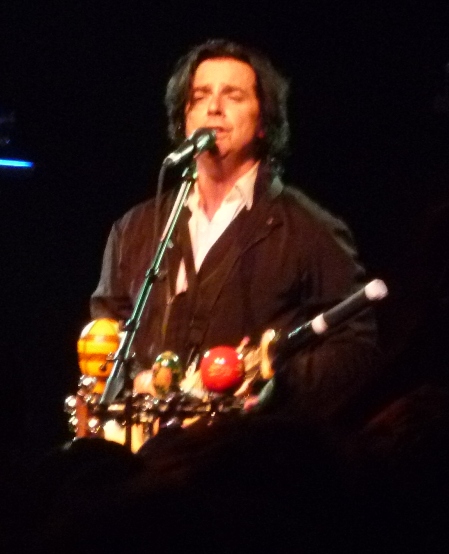 Technical problems were the theme of the night. One of H’s mics stopped working, Mark’s keyboards dropped out at the end of one track, and the aforementioned MIDI bat tanked. So no sax samples for “This Strange Engine.” But those roadblocks were easily overcome. The crowd was into it, the band was excellent, and the vibe was just what I’ve come to expect from a Marillion concert – the closest I ever get to a religious experience. I guess I’ll be due for another one in a decade or so.

There’s another Philly tourist attraction in the neighborhood up near the Museum of Art that K and I managed to miss last time we were there. This time, since we were uprooting from downtown a day early and had a car, I was compelled to check it out.

When most folks think of prisons today, the word “penitentiary” is synonymous. It was not always the case. The idea that a prison could be more than just a temporary warehouse for serious criminals (who were most likely to be executed, exiled, or heavily fined) started circulating in the late 18th-century. The first place it was tried was in Philly, at the Eastern State Penitentiary, opened in 1829. It is, truly, what one thinks of when “prison” pops into your head. 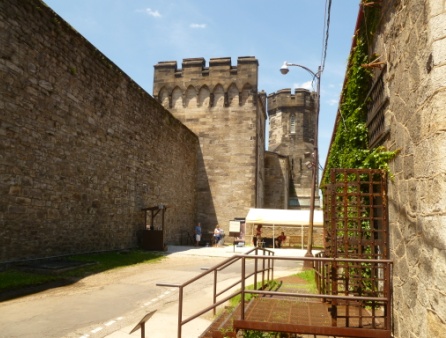 It was called a penitentiary because the core of its approach was to force prisoners to be penitent, or humble and regretful, about their sins . . . er, crimes, rather. To accomplish that task, prisoners were kept in isolation from one another at were required to remain silent at all times. 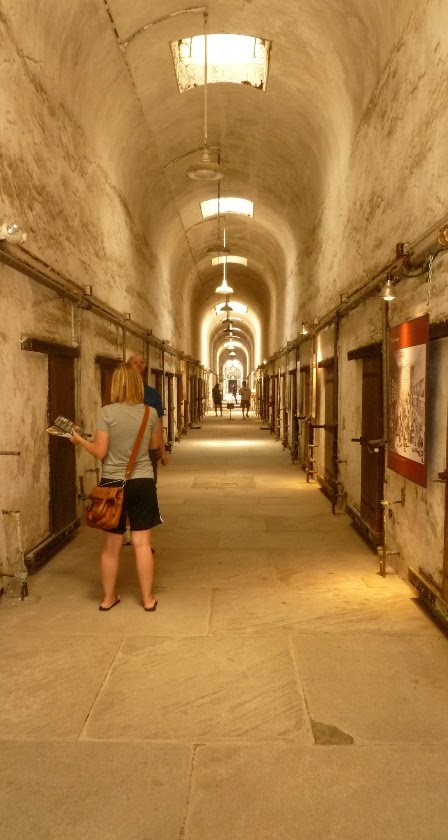 In the ceiling of each cell was a skylight. It was more than a simple way to get light into the cell. It was supposed to be a reminder of the omnipresent eye of God looking down upon them. 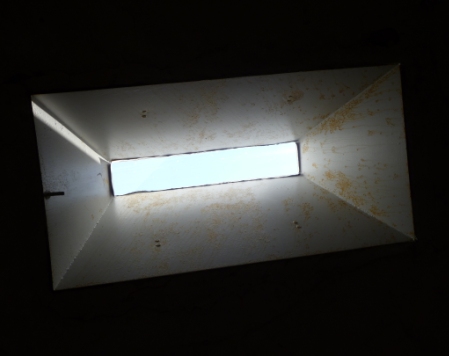 The system employed at Eastern State didn’t catch on in the United States very much (a similar system that emphasized work over penitence won out in Gilded Age America), but it was popular overseas. That being said, the general look and vibe of the place is similar to a lot of American prisons built not too long after, including the old West Virginia Penitentiary at Moundsville.

Eastern State was really a marvel of its age, architecturally speaking. It had a system of steam heat and running water (sort of – guards flushed the toilets twice a week, IIRC) long before most of the young United States did. The design itself, with its central control hub and cellblocks spiraling out from there. It allowed for maximum visibility with the fewest number of watchers. Thus, you get views like this. 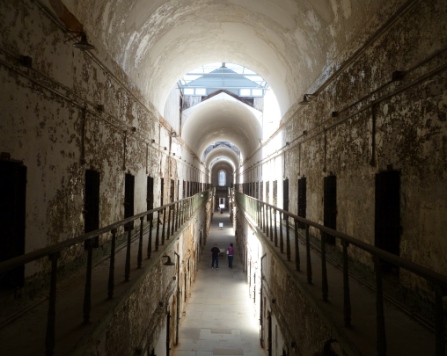 At the time, it was a noble experiment. Looking back with hindsight and an increasing understanding of how solitary confinement turns people bugfuck crazy, to call it cruel would be an understatement. Thankfully, or maybe not, politics overwhelmed the experiment, as more and more people were sent to Eastern State (the cell block above is an example of one of the later two-tiered ones, built to house more people). It was closed in 1971.

After its closure, Eastern State sat a good long while as folks tried to figure out what do with it. Various plans came and went (including one for redevelopment as high-end condos, built behind the massive outer walls), but nothing materialized. As a result, by the time it became the tourist attraction it is today in 1994, a good bit of it had fallen into ruin. Most of it is maintained that way, and thus you have things like this: 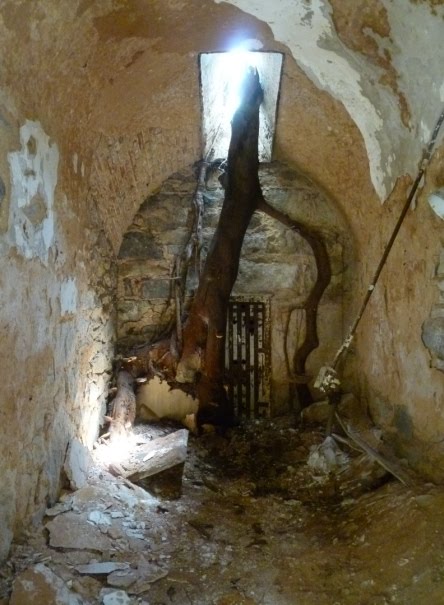 That’s a tree growing down into one of the cells. As a result of the ruin, the place is plenty creepy. No surprise, then, that it’s often used as a set for films (including Terry Gilliam’s 12 Monkeys), TV, and photo shoots.

As I said, we hit Eastern State on our way out of downtown Philly. We relocated because, in a completely happy coincidence, not only was there a Philadelphia Union game the night after the concert, but it was against DC United. I may never turn K into a prog fan, but she’s become quite a fan of the beautiful game.

My prior soccer experiences have all been at DC’s home stadium, RFK, which was built for the Redskins and (olde school) Nationals decades ago. To say it has “charm” is to oversell it a bit. It’s way too big for the average MLS game, but it does lend something to the atmosphere when Barra Brava and the Screaming Eagles can make the stands shake with their drumming.

By contrast, the Union play in a fairly new soccer specific stadium in the Philly burb of Chester, right near New Jersey and Delaware (our hotel was actually in Delaware that night), PPL Park. It sits right on the river, next to a big ass bridge that (thanks to Mapquest) would have spirited us away into Jersey. It’s a much smaller, more comfortable, and enjoyable place to experience a game than RFK. 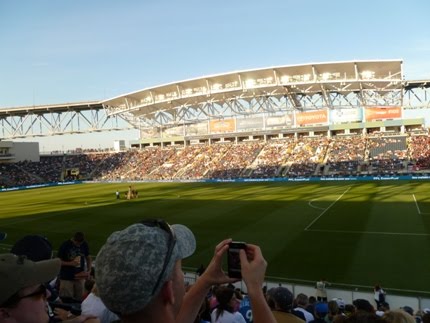 It also made for some interesting moments during the match. I decided not to buy tickets in the designated “away supporters section,” because I rightly thought it would be full with drum pounding, chanting DC fans and figured we wouldn’t want to spend another night on our feet. As a result, we were in the middle of a section full of Philly fans, many flying the Union colors (I strategically wore my US national team jersey, not a DC one). We blended pretty well, except the grin on my face as the Union impotently tried to score again and again played out over 90 minutes. 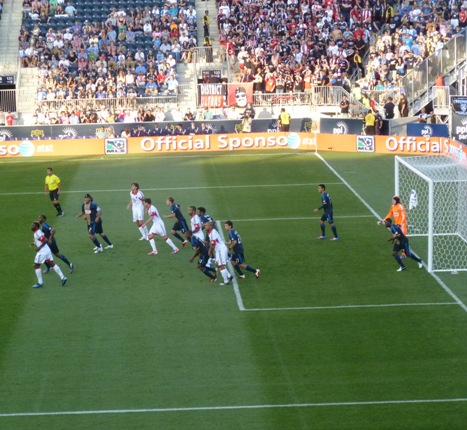 As it happened, DC snatched a late goal to win the match. I celebrated quietly to myself.

With that, our jaunt to Philly was over. We ate well, heard some great music, and watch DC United snatch victory from the jaws of defeat. Can’t ask much more than that.