To be fair, Dies the Fire starts off with a bang. Or, rather, a flash, as some unexplained event centered off the east coast of the United States (there’s an entire other series that deals with what happens to Nantucket as a result) occurs rendering anything vaguely electrical – from electric gadgets themselves to gunpowder – inoperative. After “The Change,” as it’s called, life suddenly gets both a lot more simple and a lot more complicated.

That’s particularly true for Mike Havel, one of the book’s two heroes. A pilot, Havel is flying a family to their ranch in a remote part of Idaho when The Change happens. That means the plane crashes, but, in a foreshadowing of things to come, Havel makes the best of a bad situation and everyone on board survives. That small group evolves into a large group of absurdly skilled quasi-mercenaries called The Bearkillers (‘cause Havel kills a bear, naturally), who pretty quickly adapt to the new world.

The other main thread of Dies the Fire involves Juniper, a woman who doubles as Celtic folk singer and Wiccan priestess who is interrupted mid-set by The Change. After navigating the fiery ruins of Corvallis, Oregon (set ablaze by planes falling out of the sky after The Change), she and her friends and fellow Wiccans convene at a Juniper’s cabin in the woods, where they, too, start rebuilding and coping with the new reality as best they can.

Of course, the Bearkillers and Juniper’s clan come together (quite literally, in one instance) and by the end have forged an alliance that will probably bear more fruit later in the series. I don’t really know or care, since Dies the Fire didn’t convince me to continue on with it.

The problem with Dies the Fire doesn’t lie in its setup or characters so much, although both of the main characters have their own annoyances. Juniper, for instance, is constantly spouting words of wisdom in Gaelic, which she then translates for the rest of us, like an Irish fortune cookie. It’s beyond annoying. The real problem is that Stirling setups up this nasty world and then makes it entirely too easy for our heroes to survive.

For example, although there are lots of detailed discussions about how to do things after The Change, including such necessities as feeding yourself, neither group we follow through the book is ever in danger of actually, you know, starving or anything. This isn’t The Road, in which the two main characters struggle to survive on every page. Particularly in Juniper’s neck of the woods, where her clan settles down and builds, life actually sounds pretty good.

That’s partly because nearly every character we meet who is absorbed into the two groups miraculously possesses some skill that makes them particularly suited to surviving after The Change. People pop up who have experience farming, sword fighting, breaking and training horses, and other useful skills. Nobody’s ever useless or in need of the care of others. Sure, there are children around, but after their initial absorption into either group they’re shuffled off into the background.

Which could be all right – The Road is a fairly depressing read, after all – if there was any kind of conflict happening within the clans themselves. Don’t get me wrong. Stirling gives Havel and Juniper plenty to do with regards to conflicts with black-hat wearing outsiders, from roving bands of thugs to “eaters” (of human flesh, of course) to a megalomaniacal history professor (you read that right) who has set himself up as the ruler of Portland. Those sequences are well done and exciting, if a bit predictable by the end.

But there is no kind of conflict within the groups themselves. Nobody ever suggests that Havel might be wrong to keep slogging through the wilderness rather than setting up a more permanent camp (or throwing in with folks they meet along the way). Nobody ever suggests that Juniper is wrong to fight bad guys on behalf of others based on some Wiccan version of karma. Hell, nobody even stirs shit just because they’d rather be in charge! Add to that the near total absence of any minor real life conflicts like petty thefts, sexual jealously, or good ole’ fashioned hate and Stirling’s world looks damned near utopic.

The single exception proves the rule. One of Havel’s recruits is branded as no good from the beginning, since he’s a drunk and a wife beater. After he does what drunk wife beaters do and is punished for it, he betrays the Bearkillers for no particularly good reason and with a just desserts result. Even that attempt at some sort of internal conflict winds up black and white and pointless.

Which is a damned shame, because Stirling obviously put a lot of work into the world he built and the details of how to survive in it. He would have been better off chucking one of the two main story lines in favor of some other group of characters who are having a more difficult go of things. Things might have been more interesting in a city, with multiple factions stacked on top of each other struggling for survival and authority. Alas, that’s not the story Stirling decided to tell.

It’s never a good sign when, two-thirds of the way through the book, a character writes a fictionalized, Tolkien-inspired narrative of events so far and the main character, concerned that future generations will accept it as history, muses that at least it was “ more colorful than the dirty, boring, often nauseating reality.” You know, the “reality” we’ve been reading about thus far? I wouldn’t call it nauseating, but I won’t argue the boring part. 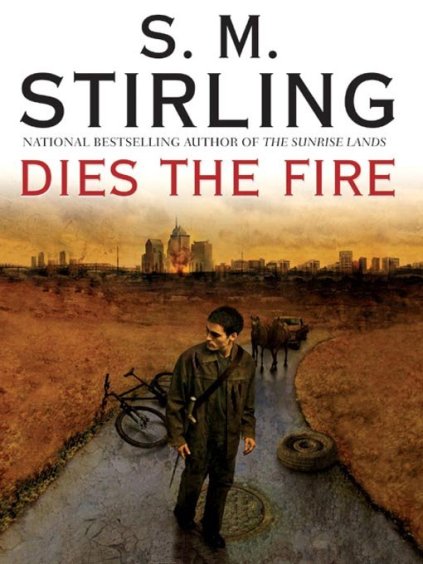