Yes, I know, I’m 39 years old and I’m only just getting around to seeing The Exorcist. In my defense, I’m not much of a horror movie fan in the first place. Plus, I do own a copy of Tubular Bells, purely for its musical exploits. That must count for something, right?

This is a hard movie to evaluate with a fresh eye in 2013. It’s become so much a part of the culture, referenced and riffed upon so many places, that it’s difficult to separate expectation from the movie itself. I had a similar problem with The Godfather – by the time I got to it I’d seen so much of it elsewhere that it didn’t land much of an impact on me.

I’ll not go so far as this review, written in 2000 when this “version you’ve never seen” was released in theaters:


It's good stuff but, basically, "The Exorcist" is a museum piece, something to be enjoyed for its historical value, its datedness and its almost quaint shock value. It's so low-tech! Those once-vaunted special effects, in which Regan apparently levitates into the air, were done by hidden pulleys and cords. Nowadays, that would all be achieved by computer-generated effects.

Sad to say, various crucial moments in the film made me think if comedic connections instead. The actual exorcism scenes bring to mind the Saturday Night Live parody. The demon involved, Pazuzu, leads me to Futurama. Even the famous “spider walk” scene, added for this 2000 version, brings to mind not abject horror, but rather Family Guy (Fonzie be praised!).

What makes the film still worth watching today, even if the effects creak with age and things sometimes verge on parody, is that it takes its own sweet time setting up the characters involved. As a result, although it’s nominally a horror flick, it doesn’t fall into the usual horror flick trope of having gory things happen to a bunch of cutouts you don’t really give two shits for. That’s particularly true of Father Karras, the young priest who first investigates the possession and then aids in dispatching poor Pazuzu. He’s a deeply conflicted, interesting character wrestling with his own demons (ha!) who has to be dragged into the central conceit of the movie, rather than rushing into it with enthusiasm and something to prove. If anything, in spite of the collar, he’s more Scully than Mulder.

Just yesterday I was writing about resisting the need to change nonfiction works just because the facts reported in them have been called into question. Likewise, it can be tempting for purveyors of fiction to go back and “fix” things in a finished work. Based on Roger Ebert’s review of the 2000 version, several of the changes, particularly the ending, were for the worse. Maybe that’s part of the reason I’m lukewarm about The Exocist.

Still and all, it’s worth a watch. Even after all these years.  Is it the scariest movie of all time?  No, but there is nothing wrong with that. 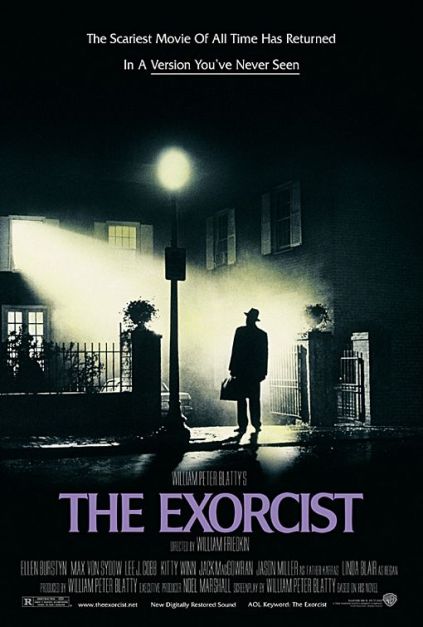