Friday Review: The End of Eternity

I am generally loath to put “spoiler” warnings on things, particularly when discussing a book that was first published while my parents were in college. Regardless, if you’ve not read The End of Eternity, I urge you to do two things. First, go get it and read it, as it’s really quite good. Second, get the hell out of here before I ruin it for you!

I’m not a huge fan of time travel in science fiction. The problem of paradoxes and alternate realities and such things makes my head hurt and, more often than not, squelches any real sense of drama. Maybe that’s why the stuff that works for me when it comes to time travel is the light (Dr. Who, in all its timey-wimey goodness) and comic (Futurama, in which the main character does, in fact, become his own grandfather).

The End of Eternity manages to sidestep those issues, thankfully, perhaps because it’s so submersed in time and travel through it, rather than the “real” world. Eternity itself is a collection of technicians, Eternals, who exist outside of time, traveling “upwhen” and “downwhen” with ease and impunity well into the future. Eternity exists outside of regular time and exerts its influence on “real” time when the Eternals make subtle changes to reality in order to produce a more peaceful, less chaotic human existence.

What Asimov does with the Eternals is rather clever. Instead of the main character, Harlan, being a rebel out to topple a controlling, autocratic system, he comes across as someone who really has no qualms with the system. In fact, there is no real dissent among the Eternals about the fundamental nature of what they do.  They are humble technocrats, nothing more.  That changes when Eternity messes with Harlan’s personal life, in the form of a woman plucked out of time named Noys, with whom he falls in love. To get her back, he’s willing to do anything, including destroy Eternity itself.

One painful thing about some of the old Asimov books is that they are very light on meaningful women as characters. Though he provides an explanation of why there are no women in Eternity, it’s not very satisfying and steeped in the misogynistic attitudes in place when the book was written. Thus, Noys is the only woman in the book. To Asimov’s credit, she becomes quite more than the bland love interest she appears in the beginning.

In fact, it is Noys who turns the whole thing around for a brilliant, stomach punching ending. We tend to read sci-fi set in the future involving Earth as being our future. It’s a reasonable assumption to make. What we learn at the end of The End of Eternity, as Harlan and Noys travel back to the 1930s, is that assumption in this case wasn’t true. As it turns out, Noys belongs to a group of even more sophisticated time travelers who don’t agree with the way the Eternals mess with the past to make it less chaotic.  Chaos drives innovation and the human desire to reach the stars (yes, Babylon 5 fans, this dichotomy sounds familiar).  She convinces Harlan not to make the change he was sent back to make. She then makes her own adjustment, sending a letter to a man in Italy encouraging him to “begin experimenting with the neutronic bombardment of uranium.”

That’s right – the entirety of The End of Eternity takes place involving a future Earth that is not our own. Harlan’s act, or decision not to act, along with Noys’s letter (sent to Enrico Fermi, presumably) gives birth to our own reality, complete with the atomic bomb, global warming, and (the big prize for Noys and, one suspects, Asimov) space flight. It’s a well earned twist that lands like a punch in the gut.

Asimov has always been one of my favorite authors, but I was ignorant of The End of Eternity until it was rereleased a couple of years ago. Is it “his single greatest novel”? I’m not sure, but it’s certainly one of the greatest. A must read if you think of yourself as a sci-fi fan. 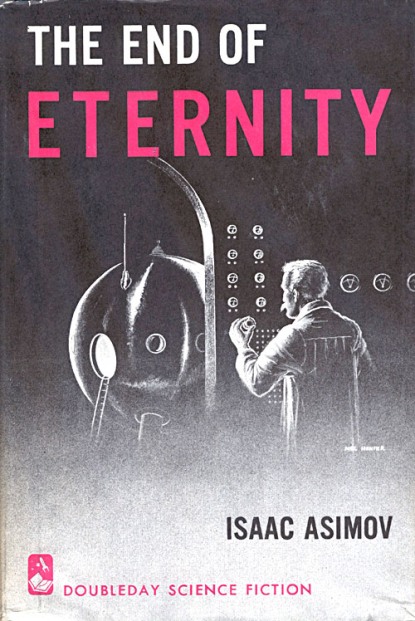