Few albums make such an impression on you that, decades later, you can recall the very first time you heard it.

It’s spring 1993, second semester of my freshman year of college in Morgantown. Finals time. As is the wont of college students, once I was done with each class I sold back as many of my textbooks as possible. Lots of folks used that extra cash for end-of-the-year booze binges. I used mine for something altogether more important – new music.

My main source of music back then, in the days before the Internet (when dinosaurs ruled the earth, kids!), was the Discount Den, which had an admirable supply of both new and used CDs, not to mention other necessities of college life. By which I mean cheap beer and inflatable sheep. But I digress . . .

Bruce Hornsby hadn’t released an album since 1990’s sort of disappointing A Night on the Town. Regardless, he was one of several artists I’d always check on at the Den to see if there was anything new. As it happened, on that day when I was flush with post-finals cash, there was Harbor Lights. I picked it up along with a few other things that I can’t remember. No, I don’t mean the sheep. Why are you asking?

Back in my dorm room in Arnold Hall, my roommate was asleep in the middle of the afternoon, fighting off a migraine. No problem. I whipped out some headphones and settled in at the desk by the window to dig in to my new tunes. I must have listened to something else first, because my first moment with Harbor Lights was with the liner notes, not the music itself.

And what interesting liner notes they were, too. For one thing, this was just a “Bruce Hornsby” album. The Range, with whom he’d had popular success, was gone, save for drummer John Molo. For another thing, the roster of those who showed up to fill their shoes was, well, awesome – Branford Marsalis, Pat Metheney, and Phil Collins, among others.

Musically, the album begins simply with solo piano, almost as if Bruce is clearing the field for what follows. By the time the main “band” for this record – Bruce, Molo, and Yellojackets’ bassist Jimmy Haslip – crank up, it’s clear that something different is going on. I sat by the window with my mouth hanging open. Seriously.

Without a doubt, the exceptional songwriting that’s always been part of Bruce’s thing is there, but now it’s being deployed in the service of music that’s much richer, deeper, and more interesting than his Range days. This is the kind of music you’d expect from somebody who jammed live with everybody from Ricky Skaggs to the Grateful Dead to Bela Fleck. I don’t know if Bruce’s failure to live up to the commercial success of “The Way It Is” finally got the record company off his back or what, but things haven’t been the same sense.

Harbor Lights marked the beginning of what, to me, is Hornsby’s halcyon days (pun intended), when the disparate influences he always gleefully showed off during live shows came into the studio. He’s no longer a household name, but he’s made a career out of relentless touring and musical collaborations. And he’s one of my favorite musicians on the planet. 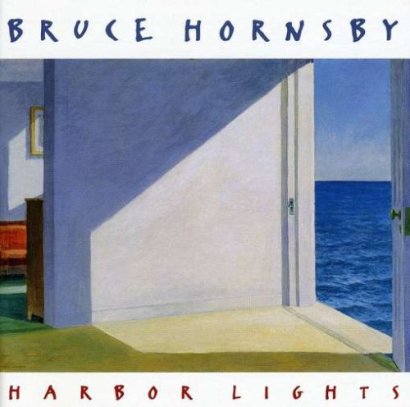