Friday Review: Dying of the Light

If you only know George R.R. Martin thanks to Game of Thrones (and the Song of Ice and Fire books upon which it's based), you should know two things.

First, he is not your bitch.

Second, he wrote stuff before A Song of Ice and Fire, some of which was really pretty good.  When your debut novel is nominated for a Hugo award, you're no slouch.

Which is not to say there aren't some parts of Dying of the Light that sound a bit familiar all these years on.  It's set on Worlorn, a rogue planet that's spent about 60 years in a place where it was habitable.  As a result, it hosted a festival that became a kind of World's Fair on steroids for the neighboring planets, but, as the novel starts, the festival has ended and the world is growing slowly colder and colder.  That's right - winter is coming!  There's also a typical Martin focus on detail (what everybody's wearing, eating, etc.) that, at some point, goes from interesting background detail about the world into overkill.  Oh, and did I mention that one faction that comes to the fore in the second half of the book has a wolf's head as a sigil?  Only they ain't Starks.

Our hero (of sorts), Dirk, comes to Worlorn at the urging of an old lover, who may or may not need his help.  As a result, he's dropped into some first rate culture shock when he finds out that said lover, Gwen, is now married (after a fashion) to a guy, Jaan,  who is also in a long term relationship with another man (his "teyn"), Garse.  It's complicated, but Martin does a good job of fleshing out the culture of High Kavallar (where Jaan and Garse come from) and its honor-based economy.

The other thing Dirk finds himself in, of course, is the middle of a planet that's dying.  The most effective part of the book for me was the first third or so, during which Gwen shows Dirk around the planet, taking him to several of the different cites set up by the various cultures that participated in the festival.  Those include a still fully active (and sparsely inhabited) city run by computers and the haunting Crying Lamia, an entire city designed as a musical instrument played by the winds.  The music it makes is so melancholy that it drives people to suicide.  Kind of like Magma (kidding!).

This exploration also gives Martin a chance to dig into the rich relationship between Dirk and Gwen.  To say Dirk holds a torch for Gwen is putting it mildly, although it's not clear that she has any real affection for him.  She takes him to task for holding onto a memory of another version of her that he basically made up (and gave a different name - names are big in Dying of the Light), but isn't certain whether she's in a better position in these days than those.

I thought the second half of the book was less interesting, mainly because it turns into a standard (if well done) series of chases, double crosses, and reveals of middling effectiveness.  And as the running occurs there's an inordinate amount of Kavallar dick swinging that, along with everybody going by their full several-words-long name, gets old fast.  Martin wraps everything up by not really wrapping up anything, with an ending that is either cleverly open ended or downright maddening (you'll have to judge for itself).

It's worth keeping in mind that Dying of the Light, for all its charms, is a creature of its time.  As this review notes, Gwen is "more than a McGuffin but not much more."  She's the only woman in the novel and, although she's not merely a damsel in need of rescue, the book mostly revolves around how the men in her life scheme over her. 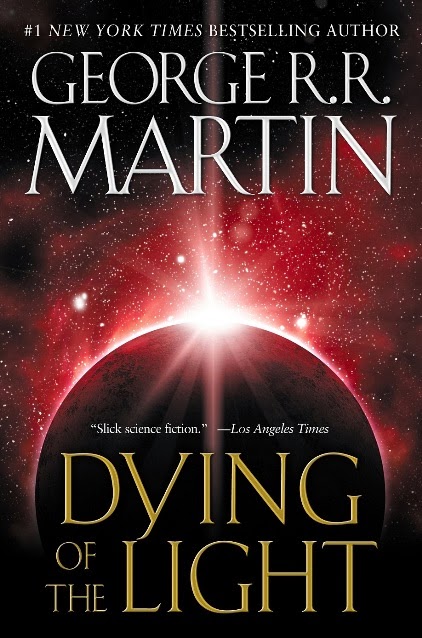