We often talk of making the world over in our own image, but at the end of the day, the world is what it is.  Any transformation is mostly metaphorical and, on a cosmic scale, brief.  But what if the world itself was still in the process of being made?  And what if human expansion is what finally tamed it?  That's the background for The Half-Made World, an entertaining mix of steampunk, alternate history (sort of), and "weird" tales.

The eastern portion of The Half-Made World looks a bit like Europe or the eastern United States in the Victorian age.  Out west, over the mountains, is a country in the process of being settled, sort of equivalent to the American west of the same time period.But further west, beyond that, things get wild.  Part and parcel of that is a native population that is more in tune with the unmade world than the more "civilized" parts of it.

Our journey into this world comes with the aid of Liv, a practitioner of the budding field of psychology who, leaves her life in the east to work at a hospital on the edge of the settled west; Creedmore, the agent of one powerful faction who kidnaps her and one of her charges; and Lowry, commander of another power faction trying to track all down.

The factions are a pair of ruthless forces that are more ideology than physical things.  The Gun favors chaos and destruction, wrought through its agents who are controlled (to a greater or lesser extent) by demons that live in their firearms.  The Line, on the other hand, preaches mechanical progress (it's main instrument are engines, which appear to be sentient trains) and converts everything in its past to a world that sounds slightly like a predecessor to Terry Gilliam's Brazil (that the Line's commander is named Lowry is surely not a coincidence).

The Half-Made World has two things really going for it.  The first is the world in builds (so to speak), particularly the way it turns an age old order/chaos conflict into the running battle of the Line and the Gun.  There isn't much time spent on why each faction does what it does or where they come from - I kind of like the ambiguity.  Instead, the book focuses on how out west everyone's lives are controlled by their relationship to one of those two factions (ally, foe, or wary neutral).

I also wonder if the way the Line and the Gun are meant to be a metaphor for American anti-terrorism activities in the 21st century.  The Gun are the ultimate terrorists, causing damage and death for the heck of it.  The deeds are committed by scattered agents that number, perhaps, in the dozens, as opposed to a kind of formal militarized force.  The Line, on the other hand, is precisely that kind of militarized force, deploying a formidable array of clever weaponry that obliterates basically everything in its path.

Early on, as the Line is in pursuit of Creedmore before he arrives at the hospital, he winds up in a small town, Kloan.  When his identity is revealed a firefight ensues that leaves most of the town's prominent citizens dead and much of the town on fire.  In spite of all that, Creedmore escapes.  What's left behind is a town now under control of the line, one that was truly destroyed so it could be saved.  If that echo of our anti-terrorism policies abroad wasn't intended commentary, it's a hell of a coincidence.

The other thing The Half-Made World really has going for it is Creedmore.  He's the only of the three main characters who really stands out in your mind.T he Line commander is just a cog in a wheel, easily replaceable, which doesn't make for great characterization.  And Liv, while fully realized in her own right, just doesn't have a lot to do.  Creedmore, on the other hand, has a fascinating past - he fell into a life of crime only after trying just about every do-gooder organization in this world (abolitionists, advocates for the native "hill folk," religious groups, etc.).  But he's a good criminal, which is what attracted him to the Gun in the end.  But now, a long way down a life extended by the Gun's magic, Creedmore is having second thoughts about his master, with whom he has nearly constant running discussions.  I appreciate that the book presents all this as an ongoing matter and dodges the easy cliche of a "bad" man who turns "good."  Creedmore is much more interesting than that.

Unfortunately, there's an awful lot of chasing that doesn't add up to a whole lot.  The unmade part of the world isn't as interesting as the Line/Gun lands.  This shift about and are generally "weird," but not all that dangerous.  As someone else pointed out elsewhere, there's still air to breathe and food to eat.  Still, the chase comes to an end, so that means something, right?  Not really.  The great secret that all parties have been chasing is never explained, although it's hinted at.  More importantly, the main characters don't seem to have arrived at any sort of end point in their stories. The book ends like it's the first of a series, but although there is a second book set in this world it isn't a direct sequel.  So the lack of a hard ending is a big disappointment.

Not big enough to avoid recommending the book, however.  The world is inventive and it's worth spending time with Creedmore as the action spills out over the west.  That it might have been better doesn't stop it from being very very good. 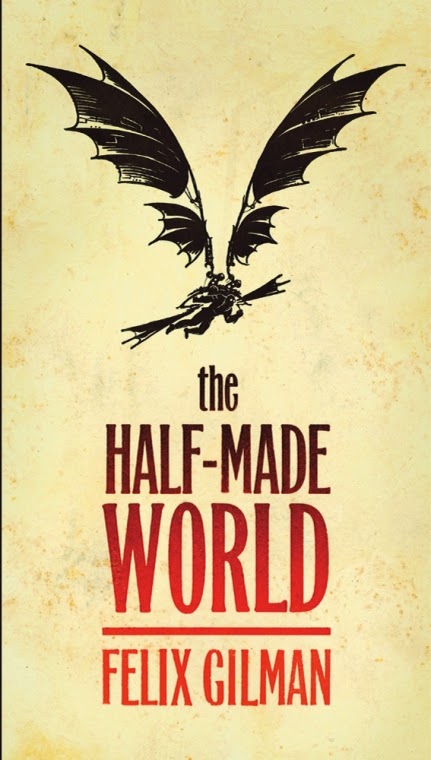