In The Devil in the White City, Erik Larson spun an intriguing tale of Chicago in the last 19th Century, entwining the tales (unfolding at the same time) of America’s first serial killer and the man responsible for developing and overseeing the 1893 World’s Fair. Compelling as it was, the Devil never really meshed with the White City, so the book wasn’t the unified whole it set out to be.

Thunderstruck takes the same basic idea and adds an obvious tie in between its two subjects. In spite of that, the sum of the parts comes out to a less interesting work than its predecessor.

One part of the Thunderstruck duo is inventor Guglielmo Marconi. As the book begins, he makes his way to Victorian England to demonstrate his wireless telegraphy system, then in its infancy (indeed, it’s nearly killed in the crib, the first unit destroyed by overzealous customs officers as a threat to the queen). Marconi’s story then becomes one of his attempts to establish transatlantic wireless service, while trying to fend off both competitors and intellectual rivals who, among other things, charge him with stealing the whole wireless idea in the first place. Larson does a good job of setting up the rift between Marconi, who was not an educated scientist and proceeded from endless trial and error, and the more theoretical Brits that battled him. In the end, of course, Marconi wins.

The other story of Thunderstruck is considerably more grizzly, but less compelling. Hawley Harvey Crippen was a Michigan “doctor” who relocated to London with his wife, Belle. I put “doctor” in quotes because Crippen went from being a homeopath to a patent “medicine” salesman, which aren’t too far away from each other on the crank scale. Belle, on the other hand, had dreams of stardom on the stage, which never materialized. By Larson’s telling, she was an overbearing, controlling woman who basically ran Crippen’s life.

Except for the affair he had with a young coworker named Ethel. Eventually, Belle disappeared, Scotland Yard started making inquiries, and Crippen and Ethel (dressed as boy) hopped a ship for America. Belle’s remains, allegedly, were a moldering under the basement floorboards.

Which is where Marconi comes back in - Crippen and Ethel were apprehended thanks to wireless communications, the first such capture in history. And that’s actually the most exciting part of the book. Thanks to the instantaneous transatlantic communication, newspaper readers on both coasts followed the chase day by day (Crippen and Ethel, and the rest of their shipmates, were kept in the dark). Sort of like O.J.’s white Bronco chase, but in really really slow motion.

Before the merger, Marconi’s story settles into a bit of a rut, as he repeatedly extends the range of his wireless equipment by building ever bigger towers (until he learns he doesn’t have to). Crippen’s does, too, as his domestic issues just aren’t that compelling. It’s not as if anybody would argue Crippen acted in self defense. Larson engages in a little leger de main in telling the tales, alternating chapters and obscuring the facts that the Marconi thread takes place several years ahead of Crippen’s flight. It’s a little sleazy, to be honest.

Crippen’s actual conviction for Belle’s murder is treated as an afterthought, which is kind of a shame. His case was, to be sure, a “case of the century,” yet we hear little of his trial. What was his defense? A simple “I didn’t do it” doesn’t seem sufficient for a case in which you’re charged with dismembering his wife. I know the legal maneuvering wasn’t really the focus of the book, but more of it would have been welcome.

As it happens, the year after Thunderstruck was published, new evidence emerged to suggest that maybe Crippen didn’t kill his wife. Modern DNA analysis suggests that the remains discovered under the basement didn’t belong to Belle. Given that there’s no hint that Crippen was even suspected of killing someone else, that really throws a monkey wrench into things. Talk about bad timing.

In the end, Thunderstruck is, like its predecessor, a quick and fun read (or listen). Larson does a good job of getting in little details of Victorian and Edwardian English society that lends the story a depth beyond the mere historical happenings. It’s not a masterwork, but it’s well worth the effort. 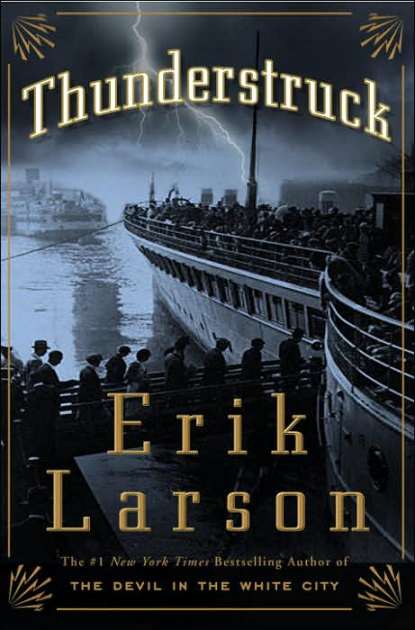