When people complain about whether a particular story works or doesn’t, most of the time they focus on how things end. Either “it just ends” or “the ending doesn’t make sense” or “I thought it was over but it kept going.” You know what I’m talking about. But just as important to the success of a story as when and how it ends is when and how it begins.

After all, most characters in any story exist before and after the story we actually see. They have backgrounds, histories, triumphs and setbacks that inform who they are, but that we never quite figure out. The question is, how is the best way to spend time with them?

The biggest flaw of The Apostle, written and directed by Robert Duvall, who also delivers an amazing performance as the titular pastor, is when it begins. That’s not because the flim’s too long (although, at just north of two hours and 15 minutes, it is), but because by the time the story really gets going, we know too much about Duvall’s character, Sonny. It’s a tale of redemption, but we get to know Sonny too well to actually want him to be redeemed.

He’s a preacher. And not one of those quiet, speaks in metaphor, Unitarian types, either. I’m talking full blown gonzo, just short of speaking in tongues (he refrains to get on the radio), revival tent firebrand. He doesn’t just talk to God, he shouts. He is the kind of asshole who, upon finding a car accident along his drive, stops not to provide first aid, but to confront the dying driver with the fact that he’s going to hell if he ain’t right with Jesus.

If that was the only thing wrong with him, the following tale of redemption would mean much more. Instead, we see Sonny stalk his estranged wife (throwing a rock through her window in the process), drag her around by her hair (in public) in a way that shows he’s no stranger to domestic violence, and smash her new boyfriend in the head with a baseball bat, killing him. What’s worse, Sonny wraps his problems up in his religion, such that his problems aren’t caused by his own violence and rage, but by the devil.

But that’s only the first half hour of the movie. At that point, Sonny flees and finds refuge in a small town as the “apostle” E.F. The rest of the movie tells the story of how he establishes a new church and builds it into a community landmark. It could be a moving, even charming, tale, did we not know what an asshole Sonny really was. I’m not one to argue that a person is beyond redemption – I’m a criminal defense lawyer, after all – but killing a man in a blind rage and then waving it away as part of some religious world view is a pretty high hurdle to cross.

Which is to say that the question of when to start the story has a great impact on what comes behind. I’ll be honest – Sonny was never a character that was going to worm his way into my heart. Having said that, had his backstory been a little more mysterious, or at least doled out along the path of his attempts at redemption, it would have made for a more compelling story. As it is, my main thought for most of The Apostle was “is he really going to get away with this?”

Which is, perhaps, the question Duvall wanted viewers to be asking as the film progressed. I kind of doubt it, but it’s possible. Whether he does, in fact, “get away with this” depends on your perspective and whether you value the enforcement of secular law or spiritual redemption.

The Apostle isn’t a great film, mostly because of how it tells its story. It does revolve around a great performance, however, so it’s well worth seeing.

On an ironic note, The Apostle and last week’s Friday Review subject, Red State, both end with a fundamentalist preacher incarcerated and unwilling to stop trying to preach the good news. Red State’s response (delivered by Kevin Smith, off camera) is “shut the fuck up.” Nobody does the same in The Apostle, but I imagine someone was thinking it. 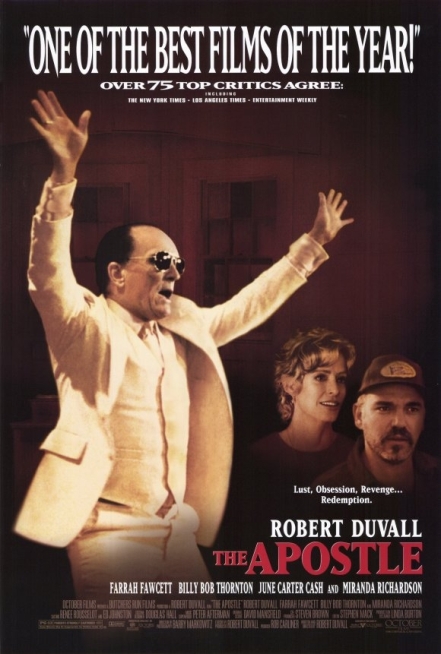