An occasional series in which I revisit classic albums that, like me, turn 40 years old this year.


'Can you tell me where my country lies?’
Said the unifaun to his true love’s eyes

Thus begins one of the most aggressively English of the great prog records. Selling England by the Pound isn’t just Genesis’s apex during the Gabriel years, it served as a template for an awful lot of neo and symphonic prog to come in the decades ahead.

It’s perhaps appropriate that the album begins with only Peter Gabriel’s voice, as he was increasingly becoming what the larger world thought of when “Genesis” came to mind (if it ever did). It’s easy to imagine why, since he was not only the voice of the band but the look as well: 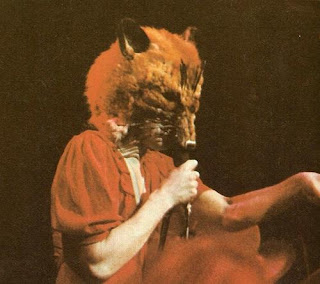 It’s easy to draw attention when you’re wearing fox’s head and your wife’s red dress up on a stage where everybody else is sitting down noodling.

But it’s also a little misleading, as Selling England by the Pound has some of the band’s most memorable instrumental passages and moments during which Gabriel is noticeably absent. The highlight, and perhaps most influential single passage, is the instrumental mid-section of “Firth of Fifth.” While it does feature Gabriel on flute, that’s merely prelude to the up-tempo Tony Banks synth solo and, most notably, Steve Hackett’s soaring guitar solo, the paradigm of solos to come based on space, restraint, and musicality rather than fleet fingers and surgical shredding. Then there’s the back half of “Cinema Show,” which not only jettisons Gabriel but Hackett as well, reducing things to a Banks/Rutherford/Collins three-way (which would lead we all know where down the road). Hell, even ol’ Phil himself debuts as a lead vocalist on the palette cleansing “More Fool Me.”

Having said that, the album would lose a lot of its aggressive Englishness without Gabriel’s delivery and the lyrics themselves. The album has a very pastoral vibe, aside from the epic tale of a London gang turf war, “The Battle of Epping Forest.” That track divides fans – some hate it, some love it. I’m in the latter group, although the band apparently never much cared for it, feeling it was too stuffed with wordplay to be effective. Maybe, but it’s certainly fun to sit down and work through.

I’ve lived with Selling England By the Pound in a lot of formats. My brother, Sluggo,* had it on a good ole’ fashioned LP, from which he made me a cassette tape many many years ago. I’ve blown through at least two, if not three, versions on CD. Over all those years, it’s remained one of my favorite musical experiences ever. In a real sense, the “hey, this kicks ass!” reaction I had way back when set me on the road to prog geekdom.

It’s aged bloody well over 40 years and spawned too many imitators. A masterpiece, a milestone, and essential listening.

* Not his real name, relax. Our parents weren’t cruel. 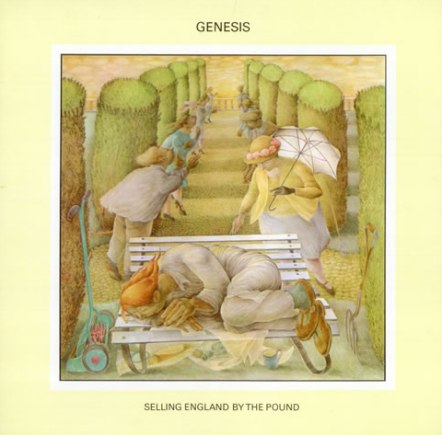