Over the weekend, Scott Turow had a column in the New York Times about the “death of the American author.” Although it begins with a jab at the Supreme Court for its recent decision strengthening the first sale doctrine (link), his broader point is that various forces – illegal downloaders and pirates, in particular – are weakening the real value of copyright. In baser terms, the situation is making it harder and harder for authors to get paid.

I’m sympathetic to Turow’s larger point. I dream, someday, of actually getting paid for writing fiction, so I’d like to think the legal apparatus to ensure those (equally fictional, at this point) payments will roll in. But I’m not sure the targets of Turow’s ire are quite correct. He points to various search engines that, when you search for an author or book title, will pull up numerous places to illegally download said titles. That’s troubling, but what else do you expect search engines to do?

The bigger problem is that there’s a market out there for people who want to access books (or other copyrighted materials) without paying for them. Putting aside cheap bastards who will always take a free version of something rather than paying for it (and who will always find a way to do it), why are people willing to go through the hassle (not to mention the legal exposure) or downloading something illegally from the Web rather than pay for it?

One reason might be that when the general public hears the word “copyright” they don’t think of the authors or other creative types whose income is tied to the protection of their intellectual property. More likely, they think of huge faceless corporations who wield copyright as a sword, not to protect the creative types, but to boost their own bottom line. Think of the old Napster lawsuits by the RIAA, bringing down the full force of the law and the Lord God on teenagers and college students who downloaded a few songs.

Or, consider the tale of Jayne’s hat.

Even in the world of sci-fi fandom, Firefly – a show that only produced 13 episodes, only nine of which were ever broadcast – has developed a fierce, loyal following.* That following has never particularly liked Fox, the network that originally aired it and, in the eyes of most, handled it in a way to ensure its early death. That the show is even talked about today, 11 years after broadcast, has nothing to do with Fox’s bungling and everything to do with the cast and crew that produced the show.

In one episode, Jayne – a gun thug with a heart of tin – gets a package from his mom. It’s not the most interesting package in the episode (two other character are gifted with what appears to be a dead body), but it’s a nice character moment. Jayne’s mom made him a hat: 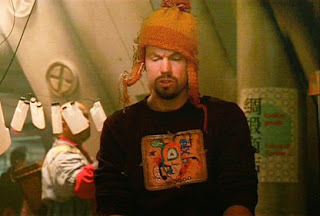 Nice hat, yes? Many fans of the show thought so. As a result, after the show went off the air and the film sequel Serenity came and went, various crafty people made some and sold them on the Net (for a very detailed explanation of all this, see here). Everything’s good, right?

Except that Fox, after years of doing nothing, has allowed a company to license the hats and sell them. As a result, the DIYers have gotten nasty letters from Fox lawyers:


Turns out in the last few weeks many of them have received cease-and-desist letters or have simply been banned from Etsy for producing DIY Jayne Hats. This communal endeavor, it seems, is coming to a close, and fans of the show are asking themselves why. Isn't the whole point of the Jayne hat that it be homemade? Doesn't it mean anything that the hats are often auctioned off at charity events? After 10 years of nothing, isn't it unfair for Fox to suddenly force lifelong fans to cease production of something they love?

It’s all perfectly legal, of course:


And the answer, for now, is that Fox owns the license and that's that. The fans who are mad that the hat was licensed for mass production are the ones who are closest to hitting the nail on the head. The fact is, Fox now has a legal obligation to its shareholders -- they have to chase down anyone producing and selling a licensed product without permission. Ripple Junction holds the license, the fans do not.

But isn’t it kind of a dick move? Here’s the megacorp that killed the show in the first place, showing up a decade after the fact to capitalize not on its own success, but on the cult that thrived in spite of Fox’s neglect.

For most people, most fans, most consumers of entertainment products, that’s the face of modern copyright law. It’s not about authors, musicians, or artists trying to get paid for their work. It’s about corporations like Fox cracking down on fans and Disney lobbying Congress to extend copyright terms every time Mickey Mouse nears the border of the public domain. Is it any wonder that they see finger wagging about illegal downloads as more of the same?

One of the things I learned in laws school – I assume Turow did, too – is that sometimes the best advice a lawyer can give his client is to not fully pursue their legal rights. Sometimes there are other concerns – public relations, long-term planning, just plain doing good – that weigh against treating every problem like a hammer that needs to be relentlessly pounded.

Maybe Fox and the other corporate copyright holders should play a longer game and worry about what they’re actions do to the public’s perception of copyright. Ultimately, that may do more good than inveighing mightily against overseas pirates and the potential customers who frequent them.