A State By Any Other Name

A century and a half ago, today, my home state actually became a state. So, happy birthday, West Virginia! But, did you know, West Virginia almost had a different name? And if it had, might things have worked out a little differently for those of us born without an aunt in Richmond (or, for Charlestonians, near the beach)? When the voters of the counties that would become West Virginia voted (mostly) not to leave the Union, the name originally given to the area was Kanawha, after the Kanawha River that flows through Charleston and into the Ohio. That did not go over very well when the Wheeling convention drafting the new state’s constitution got underway in December 1861. One delegate objected, arguing:


one reason I have for striking it out is that I am a Virginian. . . . It always makes me think of the Virgin Mary, the mother of our blessed Redeemer. It is a name that I almost revere; and I am utterly opposed to leaving it out and substituting the name ‘Kanawha’ in its stead.

Some other delegates harrumphed the importance of maintaining a link to Virginia. Another objected that naming the state Kanawha would lead to confusion with Kanawha County. He concluded:


Therefore I can see no peculiar claim that Kanawha has. There is a very pretty river there of this name - nice river - but there is no particular euphony in the name; or perhaps no claim from historical considerations. I do not know of any.

Anyone who’s heard someone from out of state try to pronounce “Kanawha” has to admit it does have some problems in the euphony department. Still another objecting delegate noted the beauty of the Kanawha river and valley and “suppose[d] they are very clever people,” which is a wonderfully backhanded compliment. Other names were proposed – Western Virginia, New Virginia, Columbia, Allegheny, Augusta and, of course, West Virginia.* It prevailed overwhelmingly in the final vote (getting three times more votes than poor Kanawha). While one of the reasons given for not naming the new state Kanawha was to avoid confusion with the already extant Kanawha County, there were similar concerns expressed about having “Virginia” in the name, too:


this thing may have some practical effect. You are so attached to Virginia that you are unwilling to lose the name. You look for immigration from other states. Will it be one of the means of inducing them to come here that you tell them that this is Virginia still - that you are to create the impression that Virginia policy is still to govern? Gentlemen, let that impression go abroad through the land, and the very name of Virginia, the very idea that Virginia may still prevail over this portion of the State, will prevent hundreds and thousands from coming within your borders.

Another delegate was more blunt:


Sir, there is more in this than perhaps I have said. If you make an agreement with eastern Virginia that after the division takes place, one is to be called East and the other West, or one is to be called Old Virginia and the other New, there might be less impropriety in it; for then it would indicate a division of territory, but, sir, under any circumstances they are to retain the name. They are to be Virginia and we are to be Little Virginia or New Virginia, or West Virginia, or some other soubriquet which is to degrade us in comparison with them. That is what gentlemen are driving at, sir.

Those concerns turned out to be valid. Sure, there are other states with geographically based names, but they’re complimentary to each other – North Dakota has its South Dakota, South Carolina has its North Carolina. But there is no East Virginia, just plain old Virginia. Making things more confusing, there is still an area referred to as western Virginia (a large hunk of which, to make things even more confusing, lies to the south of West Virginia!). It’s not hard to have sympathy for folks raised elsewhere who can’t really separate West Virginia from the old commonwealth (hence the “an aunt in Richmond” joke).

Would our founding fathers have been wise to listen to those concerns and choose a name that was completely unique? It probably wouldn’t have hurt. But I doubt it would had made a huge difference over the past 150 years. A name is not destiny and West Virginia’s current state has more to do with geography, shifting economic winds, and good ole’ fashioned political shenanigans than anything else.

Besides, regardless of what the state would have been called, it would still be Almost Heaven. Still full of beautiful vistas and babbling mountain streams, deep green mountains and rolling valleys. It would still be home to the same kind of slightly-out-of-step-with-modernity population it has today. Whatever it was called, West Virginia would still be West Virginia.

And, hey, if Futurama’s any guide (and when has it led you astray?), we’ll get our revenge on the mother commonwealth: 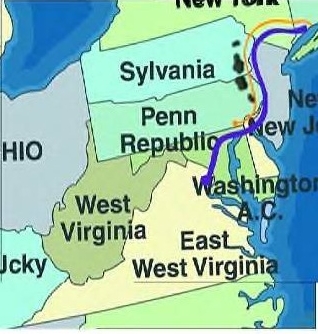 We’ll just have to wait another thousand years or so.

* NOTE: I’ve always seen “Vandalia” listed as one of the proposed names, but I don’t see it in this transcript, at least. Wikipedia includes it, however. Make of that what you will.
Posted by JD Byrne at 5:00 PM