Let’s begin with the thought that no representation of a historical event can really accurately capture that event. Even first-hand news accounts based on interviews from people who just witnessed the event often get things wrong, either the minor details or broader strokes. Which is only to say that any movie, even a documentary, isn’t able to present “the truth,” but rather only one variant of it, a variant that’s molded for reasons of art and, sometimes, politics or propaganda.

When Zero Dark Thirty came out last year I wrote about the controversy swirling around of whether it justified torture as the means by which the United States learned the location of Osama bin Laden, ultimately leading to him being killed by Navy SEALs. On the one hand, it was an apologia for torture that shows an efficacy that isn’t borne out by the historical record. On the other, it’s a movie that, perhaps, is taking aim at broader themes. As I concluded:


Which is just to say, you really need to see the movie before you decide its morally horrific. Is there some reason to think that critics, who have actually seen it, just check their moral compasses at the door? Or is the film perhaps more nuanced and subtle than Bruni, et. al., are giving it credit for? Who knows? I suppose we common folk will need to wait until January to find out.

In the end, it’s best to judge for yourself.

So now that I’ve finally seen Zero Dark Thirty, I suppose it’s time to do some judging. Putting to one side Kathryn Biggelow’s ill-advised remark that the film is “journalistic,” I think most of the furor about the film was ill founded.

First and foremost, does the movie come out and say torture was effective in getting crucial info on bin Laden and thus allowing us to track him down? Sort of yes, sort of no. The real problem is that, for dramatic/streamlining purposes, the dozens of people questioned and, in some cases, tortured for information during the search are pretty much reduced to one guy, Ammar. We see him brutalized in multiple ways, during which he either provides no information or incorrect information (in one scene he feebly recites every day of the week as potential answers to try and avoid being crammed into a tight wooden box). Later, after an attack in Saudi Arabia, he’s treated to lunch and a little kindness (in addition to false information about the attack) and only then does he provide some relevant information.

Is Ammar’s story one of torture working in the end? After all, during their little lunch the chief interrogator tells Ammar that he can hurt him again, if he doesn’t cooperate. The threat of more brutality hangs over the conversation like a circling bird of prey. Or, alternately, is Ammar’s story one that shows how torture doesn’t work, since he only gives up important information after the torture stops? Honestly, it’s both.

If Ammar was a real person, a single identifiable individual, I’d say it shows that torture had been effective. The brutality he experienced is a bell that cannot be unrung. After all, the whole reason the bad cop/good cop dance works isn’t because the suspect wants to please the good cop, it’s because he wants to avoid further pissing off the bad cop. Once tortured, any further questioning while the threat (explicit or otherwise) remains is tainted, at least within the short time frame presented in the film.

But Ammar isn’t a real person. He’s a character in a fictionalized account of a real event, one that serves as a stand in for numerous detainees, if not damned near all of them. Dramatically, the distinction between what produces no information (torture) and what produces valuable information (kindness, or at least humane treatment) is stark and dramatically effective.

So, is it a movie that argues for the triumph of torture or not? Did Dick Cheney really love it? Ultimately, I think it works as a sort of Rorschach test for the viewer. There’s enough there for viewers looking for a pro-torture message in the film to find it, such as later repeated references to new limits on torture making the hunt for bin Laden more difficult. But there’s also enough there to read it as a statement on the ultimate futility of torture as a useful information gathering tool. There is never, to be fair, a full-throated moral objection to torture, however. It’s a purely utilitarian argument.

Personally, I see the film as a meta commentary on the United States reaction to 9/11 and our behavior during the War on Terror. In addition to being a stand-in for the person (or persons) who led the hunt for bin Laden, the main character Maya strikes me as a stand-in for the American people as well. She is spurred to action by 9/11, is uncomfortable with some of what that means, but ultimately she’s not willing to completely repudiate it. Her laser-like focus on bin Laden is contrasted with the world moving on around her, raising questions about the need to expend resources on the hunt. And, finally, when all is said and done, what has Maya really accomplished? She heads home, alone, in the back of an empty C-130 transport plane, to an uncertain future. The air of melancholy at the end of the film seems to me to be a giant question mark – like someone’s asking “was all of this worth it?”

Having said all that, is the movie any good? It’s not bad, but there isn’t much greatness in it. Most of the film is a slow, slogging procedural that’s only of interest because of the inciting crime and the target of the manhunt. There’s no real character development, things just move from point A to point B, efficiently and competently, but not very compellingly. The exception to the rule is the depiction of the raid on bin Laden’s compound. Rather than pump it up artificially to be the kind of loud, bright, fast action sequence we’re used to on the big screen, Bigelow lets it play out in real time. It’s a slow, methodical execution of a meticulously assembled plan. It’s all the more chilling for the cold efficiency of the SEALs in doing their thing.

Good art, at some level, is about confronting the audience with something they don’t want to see or think about. On that level, Zero Dark Thirty succeeds in spades. Whatever your ultimate takeaway from the film, it’ll make you think about what’s in it, think about it, and make you reconsider your own thoughts. That’s not a bad result, all things considered. 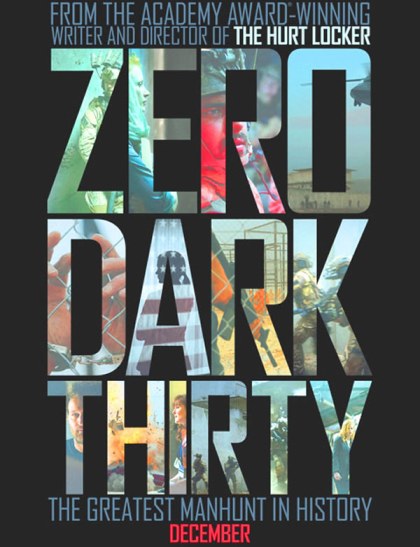