I'm certain about one thing went it comes to Gravity - director Alfonso Cuarón and his technical team earned every one of those Oscars they won last year.  The film is a technical marvel, seamless and incredibly real, particularly given that all but the last few minutes take place in space.

But beyond that - well, I'm conflicted.

Because, here's the thing - aside from the visuals, there isn't a whole lot else going on.  This is either a bold rejection of most storytelling conventions, in which case props to Cuarón, even if it doesn't quite work, or it's yet another example of a movie that's all about on-screen dazzle at the expense of things
like characters, plot, and the like.  Just because the visuals are used to bring to life something realistic and dramatic, instead of (for an example) giant robots that transform into easily sold commodities, doesn't give it a pass.

A regular flick, I suspect, would have given us some scenes on the shuttle before the big accident, or even on the ground during the run up to the mission, to get to know the characters.  As it is, only through some clumsy dialogue while they drift in space do we learn anything about them.  As a result, we can't really engage with them on an emotional level.  Yes, it would be tragic if they died while in space (as with the rest of the redshirts), but aside from that, why care?

But on the other hand, I respect that choice.  I have a short story where the main character escapes from many years of captivity.  One of the notes I got on it from my crit group wondered if he needed something more specific to "get back to" as motivation.  I didn't see it that way - he was a prisoner, for fuck's sake - but I can see the point.

I've often heard that short stories are better for adapting to movies than novels.  They have less material to start with, of course, so a director doesn't have to worry about cutting great swaths of material to tell the whole of the story.  Gravity feels like a short story, reminding me of something like "The Cold Equations," where it's less about the characters and more about the situation they struggle against.

Ultimately, it's hard to fault Gravity for not being the kind of movie I would make.  It's a visual showpiece, a true movie - something that would be nearly impossible to pull off in another medium.  In that way, it's a bit like 2001, which doesn't have the world's greatest script, either.  So that's good company to be in.

Gravity isn't much more than a trip, but it is one hell of  a ride. 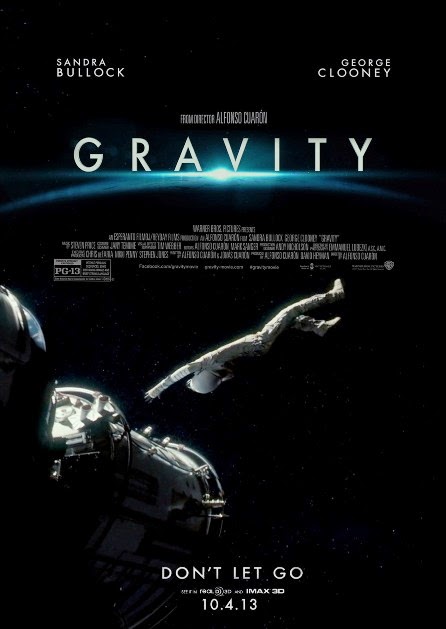