How Not to Win Friends and Influence Voters

Let me start this screed by saying I'm a registered Democrat.  In a two-party world, the Dems come closer than the Republicans to being "right" on issues that matter most to me.  Needless to say, neither party does swimmingly well, however.

Which is why I'm particularly miffed by this piece of misguided get-out-the-vote strategy that's shown up in West Virginia (in this particular example, Cabell County, but it's happening around the country: 
The West Virginia Democratic Party monitors the level of voting in your neighborhood.  The Cabell County Clerk's Office official voting records are public information, and show whether you cast a ballot, but not who you voted for.  We will be reviewing these records after the election to determine whether you joined other citizens who voted in 2014.

[Info about voting times, registering, and phone number to call for help omitted]

Attached is our official "I Voted" sticker.  We encourage you to wear this after you go to the polls.  We only send these to the individuals we believe are most likely to vote.  Please don't disappoint us.


This strikes me as spectacularly wrongheaded, for a couple of reasons.

First, is the a more Orwellian image than someone pouring through records to see whether you voted or not?  Why not just include a page that looks like this: 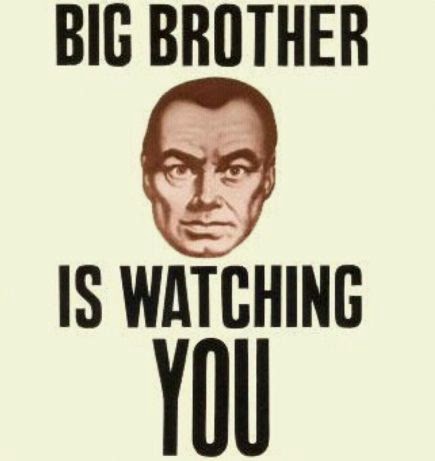 It would get the point across just as well.

Besides, hasn't anybody in the DNC been paying attention to the public backlash about the NSA, TSA, and various national data gathering schemes?  Obama may not have launched them, but he's defended them vigorously.  In an election where Democrats are doing anything they can to distance themselves from Obama, sending out a "he knows when you are voting, he knows when you are not" letter is beyond tone deaf.

Second, the tone of this letter is very much, "you're a Democrat, you know who to vote for," which, I suppose, is a basic get-out-the-vote thing.  But it assumes that any Democratic candidate is owed my vote, which is not the case.  I'm not one of those "if you don't vote, you forfeit your right to complain" people.  I try to only vote for people I actually like.  The current slate of WV Dems are, quite frankly, not very appealing.  No amount of threatened shaming is going to change that.

Give us better candidates, Democrats.  Then you wouldn't have such a hard time getting any of enthused to go vote for them.
Posted by JD Byrne at 2:08 PM