Before a couple of weeks ago, I had never heard of William Garrow.  Why should I be familiar with an English barrister who got his start while the Revolutionary War raged on?  Thanks to a highlighted Wikipedia entry, now I know.  He was, in many ways, the forefather of modern criminal defense attorneys, so much so that he is credited with introducing the phrase "innocent until proven guilty" into the vernacular.  Surely such a trailblazer deserves a modern pop culture gloss, right?

Enter the BBC and Garrow's Law, a short series (8 episodes in total spread across two seasons) based on the young Garrow's fledgling practice in the Old Bailey, which started in 1783.  When I found out that the first season was available on Netflix, I shipped it straight to the top of the queue.  The result is a suprisingly rousing and entertaining few hours, especially if you do what I do for a living.

Although there are dramas that play out elsewhere from the Old Bailey, that's where the action really is, as young Garrow finds his feet and butts heads with his regular adversary, Silvester (not a cat, but a prosecutor - and crack shot).  Court itself is a much livlier affair that we're used to these days, even on Law & Order.  It's sort of like a state magistrate court affair, played out before an audience borrowed from Jerry Springer.  Except the stakes are much higher - the drop or, at the least, transportation to one of the colonies.  I have no idea how realistic the depiction is (the records of the Old Bailey were used as inspiration, we're told), but it sure is fun.

In court, we see Garrow grapple with the same issues his progeny still wrestle with today.  It's one thing to be a zealous advocate for someone who's really innocent, but what of the guilty?  Does every accused deserve the best defense?  Plus, we see an early deployment of the "lying slut defense," which works like a charm.  One thing that's never fully developed is just how Garrow changed the system in which he worked.  You just don't show up one day and say, "today, m'lud, I'm going to defense these accused."  Some better foundations would be nice.

But, at the end of the day, Garrow's Law is a courtroom drama, like any other.  Save for the period costumes and the lack of CSI-style forensics, of course.  And a solidly entertaining one, at that. 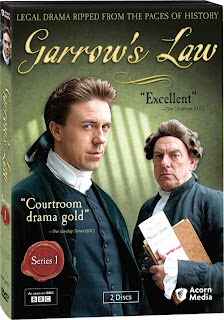