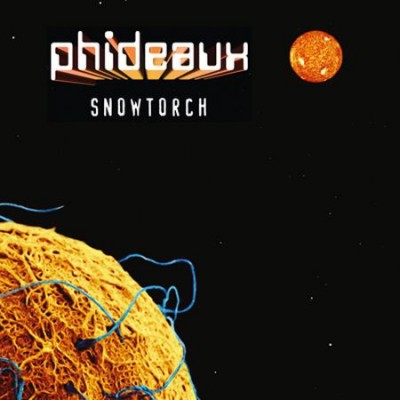 I have a bone to pick with Phideaux, the Los Angeles-based band helmed by guitarist/vocalist/composer Phideaux Xavier.  Almost everything they've released since 2006 are conceptual pieces that promise to be ongoing.  Yet, rather than provide part three of the trilogy started with The Great Leap, they produced Number Seven.  Instead of the promised a quick-on follow up to that one, called, creatively enough, 7 1/2, we get Snowtorch.  Can't they follow through with anything?!?

OK, that's not really a bone I'm too prone to pick when the tangential results are as good as Snowtorch (and Number Seven, for that matter).  Running just long enough to fit onto one side of a 90-minute cassette, Snowtorch is the band’s most overtly proggy release to date.  A good hunk of the two epics (parts one and two of the title track) are given over to extended instrumental workouts stretched over shifting meters and rhythms.  But workouts are (or sound to be) carefully constructed passages, not just a clump of aimless jamming.  Themes rise, fall, and appear again minutes later.  This is what epic prog should be.
Lyrically, the album is as inscrutable as ever (at least to me – I’m not very good a digging deep meaning out of things, as my high school English teachers), but we seem to be dealing with the origins of the Earth and life upon it.  Shouldering that burden, vocally, is Xavier, of course, and his usual cohort of female vocalists.  One of them (Valerie Gracious, I think) comes to the fore on “Helix,” which acts as the meat in the “Snowtorch” sandwich.  What common sense might say should be a calm port in the storm between the two halves of the epic instead booms out at you, thanks to the vocals.
One of the things that has always appealed to me about Phideaux’s music is that it so often has a relentless sense of forward motion to it.  I’m not talking about a drum beat rhythm (although that helps), but rather the rhythmic churning of the rest of the band that propels things forward.  Snowtorch has that feel in spades, almost relentlessly pushing itself to the end of its 45 minutes.  By the time we’ve reached the short instrumental finale (a sort of cooling off exercise), it’s been one hell of a ride.
In the end, Snowtorch takes the Phideaux sound and cranks the proggy elements up to 11.  Along the way, it’s still full of the fantastic lush arrangements that make the band so fun to listen to again and again.  Pick this one up – it’ll be one of the best of 2011.
The Details
---------------
Snowtorch, by Phideaux
Released 2011
Tracks:
1. Snowtorch - Part One (19:39)
a) Star Of Light
b) Retrograde
c) Fox On The Rocks
d) Celestine
2. Helix (5:54)
3. Snowtorch - Part Two (16:11)
a) Blowtorch Snowjob
b) Fox Rock 2
c) Coronal Mass Ejection
4.  ...  (2:34)
Total Time: 44:08
Players:
Phideaux Xavier (acoustic guitar, piano, vocals)
Johnny Unicorn (keyboards, saxophone, vocals)
Mark Sherkus (keyboards, piano)
Linda Ruttan Moldawsky (vocals, metal percussion)
Molly Ruttan (vocals)
Gabriel Moffat (electric guitar)
Mathew Kennedy (bass guitar)
"Bloody" Rich Hutchins (drums)
Valerie Gracious (vocals)
Ariel Farber (vocals, violin)
with Stefanie Fife (cello) and Chris Bleth (flute, soprano sax)
Posted by JD Byrne at 4:44 PM