If you’ve seen Martin Scorsese’s Hugo (which is pretty damned good, by the way), then you know of Le Voyage Dans La Lune. Produced in 1902, it’s generally regarded as the first science fiction film ever made. It’s floated around for decades in grainy black and white, admired nonetheless for its groundbreaking effects and whimsy.

But grainy black and white wasn’t the way Georges Méliès intended Le Voyage . . . to be seen. In what must have been a truly pain in the ass process, Méliès and his collaborators colorized the original black and white print – painting it by hand. In 1993, a full-length version of the color print was found, but it was in terrible shape. It took nearly 20 years for it to be restored to the point where it could be shown again in public.

The premier took place at the Cannes Film Festival last year. To mark the occasion, the French electronic duo Air was commissioned to do a soundtrack (Le Voyage . . . is a silent film, after all). When I heard that, it was like a perfect storm of geekiness – a classic old film refurbished, a landmark piece of sci-fi, and a new electronic soundtrack? Sign me up! I figured I’d wait a few years before Criterion or Kino made the whole thing available on DVD.

So imagine my surprise when I discover a new album by Air called Le Voyage Dans La Lune, which takes the soundtrack for the 16-minute film and stretches it out to about twice that length (still pretty short for a modern day album). And, oh by the way, it comes with a bonus DVD that contains the film, in all its restored glory. Needless to say, I jumped on it, with more interested in the DVD than the album itself.

Needless to say, Le Voyage . . . is almost a completely different beast from movies being made 110 years after its debut. There’s no real narrative flow, just a series of connected scenes. The original film has no credits whatsoever (the restoration crew and the band get some added on). And, what’s most striking to me, is that there are no interstitial bits with written dialogue or explanation, as later silent films would have. It really is a completely visual experience.

Having said that, it’s really a hoot. The color palette has a lot more in common with animation than the real world (or even Technicolor), which would give the whole thing an otherworldly vibe, if it wasn’t already there thanks to, you know, it being about a trip to the moon. It’s easy to see why it caused such a sensation and stirred such wonder in the people who saw it on the screen. It’s also easy to imagine that with the first sci-fi film no doubt came for the first sci-fi fan nitpicker, who would deride the scene in which the massive cannon fires the “craft” towards the moon with no recoil whatsoever.

But this, technically, is a review of the album, not the movie, so what of the music? It’s good. As a soundtrack, it doesn’t mesh particularly well with the film until the first scene is over, which is a little off putting. Otherwise, it works quite well. The score itself is all instrumental, but the extra material on the album includes a couple of vocal tracks and some spoken word bits. They sustain the mood and feel of the film in fine fashion (the music on the album is not sequenced in the same way as the film). I’ve found Air’s output to be a little hit and miss, and while this is no masterpiece, it certainly qualifies as a “hit” in my book.

Bottom line – this is a pretty cheap way of owning a part of cinema history. And you get a pretty good album in the bargain, too. 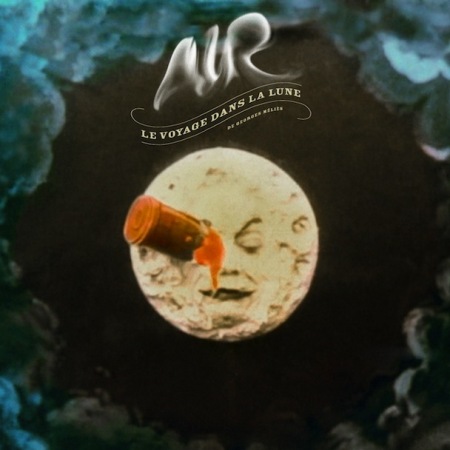