For my first two years of college, I lived in dorms. Back in those dark days, kids (we called them the 1990s), dorms weren’t wired up and hooked in the way they are now. TV viewing, such as it was, happened in common rooms. That was the only place there were cable hookups. There was no Internet to speak of, certainly no Youtube or streaming services. It was truly like the dark ages.

Which is why on May 1, 1994, a Sunday, I woke up earlier than any reasonable person should, threw on some clothes, and headed downstairs to one of the Stalnaker Hall common rooms, flipped on the TV, and flopped down on a couch. It was a Formula 1 morning. The Grand Prix of San Marino, particularly, in Imola. This was my only opportunity to watch it. It was either that or wait for the race report in the late lamented On Track a few weeks later. Some people get up early on Sundays for Jesus, I do it for Formula 1. That Sunday, I wish I’d slept in.

Imola that year was already in a bad way when Sunday morning rolled around. In Friday practice, Jordan’s Rubens Barrichello (recently moved to IndyCar) walked away from a horrific crash that saw his car launched over the tire barrier. Saturday was even worse, as Austrian Roland Ratzenberger, driving for Simtek, was killed in a crash during qualifying. The race start on Sunday was auspicious, too, when Pedro Lamy slammed into the stalled car of J.J. Lehto when the green flag fell.

Ayrton Senna was on pole position at Imola. His third race with a new team, Williams, after several years, and three World Championships, with McLaren. Stripped of the electronic aids that made it so dominant the past two years, the Williams was an unruly beast that had failed to finish the first two races of the season. Senna had yet to tame it, but he at least wrangled it well enough to be fast. That was what he did, after all.

On lap seven, after a restart following the Lamy/Lehto crash at the start, Senna was leading Michael Schumacher. In a corner called Tamburello, a lightning fast left hander, something on the Williams broke. Senna and the car slammed into the outside wall. A suspension piece broke free from the car and struck Senna in the head. The greatest racing talent of his generation, and one of the all time greats, was dead, the final casualty of that weekend at Imola.

As you might expect, any documentary about Senna leads to that bloody weekend at Imola. It’s a credit to director Asif Kapadia that Senna still manages to be emotionally riveting and compelling even when you know how the film must end. That’s particularly true if, like me, you saw it all happen on TV. He does it by keeping things focused on archival footage, mostly of Senna on track and around it, but also with some old home movies (young Senna in a kart is a thing to behold). There are no cutaways for talking head interviews (although they are used as voice overs), nor any fresh footage of any place or person relevant to the film.

That rawness and immediacy is the flim’s best feature (it’s kind of amusing to read reviews by critics amazed by the all the in-car footage). It’s also its biggest downfall. Because Kapadia is focused so much on what happens on track and plumbing the F1 film archives, we learn very little about Senna the man outside of the car. Via some interviews we learn that he was deeply religious (Tim Tebow’s got nothing on him) and there are a couple references to his charity work, but not much else. To be honest, there might not be much there. Senna came from a privileged background, broke through to the top levels of the sport pretty quickly, and never really suffered through any kind of slump or personal turmoil. Still, I wonder if the lack of depth would keep non-race fans from really being sucked in to the film.

What takes center stage is Senna’s rivalry with Alain Prost, the calculating French driver who would win four World Championships. Their time together at McLaren is the stuff of legend. The film makes a good case that Senna couldn’t cope with the sport’s political currents, while Prost navigated them with aplomb. In a wise move, Kapadia doesn’t get bogged down in the blame setting details of their confrontations (nor does he dwell particularly on what exactly happened to cause Senna’s fatal crash). It’s not important who was right, but simply that they were at odds. Whatever their animosity, however, we learn just before the closing credits that Prost is now one of the trustee’s of Senna’s charitable organization.

I’ll be honest – I was never a Senna fan. When I started following Formula 1 he was one at the top of the heap, the kind of guy I generally tend to root against. Had he moved to Ferrari instead of Williams, all would have been forgiven, however (Ferarri was an underdog back then, so I gravitated that direction). But I never questioned his talent or his dedication. In his final season with McLaren (embarrassing his teammate Michael Andretti most of the time), he won the European Grand Prix at Donnington in a driving rain. He was untouchable (as he had always been in the rain), driving a car that was not really that good.

That’s what comes through the most in Senna.  A supreme talent, gone much too soon. If you are any kind of race fan, it’s a must see. If you’re not, odds are you’ll still get wrapped up in it. 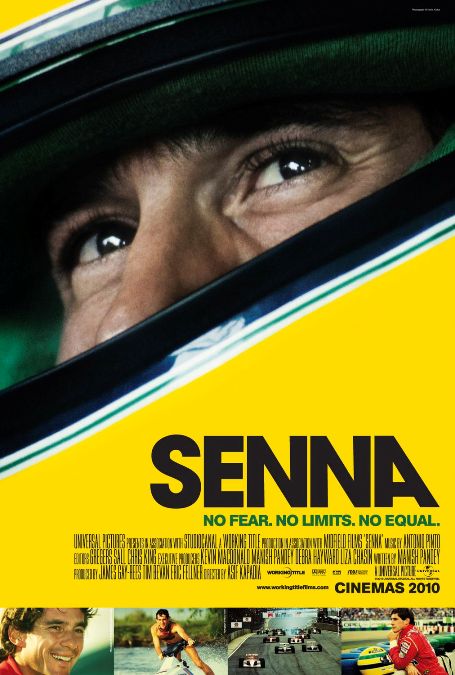