My first exposure to Present, the Belgian RIO band, was the DVD Rising to the Surface, composed of highlights from the 2005 version of NEARFest. Each band was given about 20 minutes on the DVD. Present’s time was taken up by one long track, filled with hypnotic and ferociously repetitive rhythms and musical motives. No vocals. No melodies, really, to speak of. The weirdness of the scene completed by an older guy on stage sort of 'conducting,' but only in the loosest sense and by a dude who came out about five minutes from the end wearing only a kilt and face paint, with a metal pipe he proceeded to beat the hell out of for the rest of the song.

After I saw and heard that, I said to myself, 'Self, you’ve got to hear some more from these guys.' It was not something you would walk away humming. But it was compelling, interesting, and deeply odd.

Turns out that the guy semi-conducting was Roger Trigaux, who had been one of the founding members of the other Belgian gift to RIO, Univers Zero. Trigaux, a guitar play, left Univers Zero to form his own band (although Univers Zero drummer/guiding light Daniel Denis worked with both). Given the shared histories, comparison is inevitable and, I think, unusually useful. Univers Zero takes more of a chamber music approach, so much so that I once wondered in a review if they could be called a “rock” band at all. Present is a little more obviously a rock band, given that Trigaux is primarily a guitar player. What both bands share is a commitment to making wonderfully uncommercial music that really calls out for close attentive listening.

Triskaidekaphobie is the band’s first album, released in 1980, while Le Poison Qui Rend Fou followed in 1985. In 1989, the wonderful Cuneiform label released them both on the same CD. They are precisely what I expect from Present at this point, even if they were the ones that set the standard in the first place (that lengthy workout on the NEARFest DVD is actually the lead off track from Triskaidekaphobie). I’d be lying if I said I had completely absorbed all this music, or even that I prefer it to 2001’s High Infidelity (definitely not a cover of the REO Speedwagon chart topper!), which I’ve had for a while.

Sometimes when I listen to stuff like this I’m reminded of the description of the Pan Galactic Gargle Blaster from The Hitchhiker’s Guide to the Galaxy: it "is like having your brain smashed out by a slice of lemon wrapped round a large gold brick." But in a good way. Seriously! 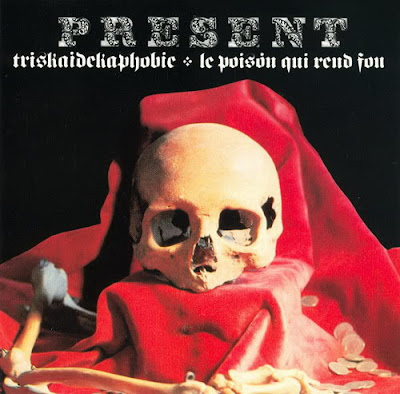